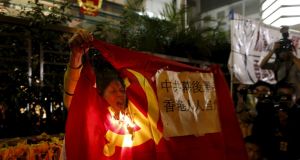 A demonstrator burns a flag of the Communist Party of China during a protest over the disappearances of booksellers in Hong Kong. Photograph: Tyrone Siu/Reuters

Thousands of people took to the streets of Hong Kong on Sunday, demanding to know the whereabouts of five missing people linked to a local publisher of books that are critical of Beijing’s leadership.

Local publishers and book vendors are unnerved by the mysterious disappearances, and in some cases they have pulled books critical of Beijing’s leaders from their shelves.

Hong Kong, a former British colony handed back to China in 1997, is constitutionally guaranteed autonomy from Beijing for 50 years, but the disappearances have led to suspicions that mainland law enforcement officers were ignoring the law.

Lee Bo (65), a shareholder of Causeway Bay Books and a British passport holder, went missing from Hong Kong in late December, although his wife has withdrawn a missing persons report, saying that he travelled to China voluntarily to assist in an unspecified investigation.

Four associates of the publisher have been unaccounted for since late last year.

Dressed in yellow and holding up yellow umbrellas, the hallmark of the anti-China protests that crippled parts of Hong Kong in late 2014, the protesters demanded to know the whereabouts of the missing booksellers.

“Today’s Lee Bo is you and me tomorrow,” the protesters shouted.

The Hong Kong government said in a statement it was “firmly committed to protecting the freedom of expression and freedom of publication”.

“The rule of law is the cornerstone of our society,” it said, adding that police are investigating the cases and have sought assistance from mainland authorities.

“Nobody is safe in Hong Kong now,” said Bao Pu, a publisher.

As of Thursday, more than 500 publishers, writers, booksellers and members of the public had signed an online petition pledging to “not fear the white terror and uphold the principle of publication freedom”.

White terror is a term used to describe periods of political persecution by authoritarian regimes.

Britain and the US have also expressed concerns about the disappearances.

China’s foreign minister Wang Yi skirted a direct question on whether the men were under Chinese detention at a recent press conference.

China’s state-run Global Times tabloid, however, wrote in a recent editorial that the booksellers were exercising an “evil influence” in China through their political books.

The newspaper went on to say that it was “reasonable” for law enforcement agencies to “circumvent the law when they seek cooperation from an individual for investigation”.

Political gossip books and exposes on Chinese leaders have been a lucrative niche market for Hong Kong booksellers catering to Chinese visitors accustomed to censorship of sensitive literature back home.

But now, some stores have distanced themselves from such books.

The Causeway Bay Books shop, which has been linked to all five missing men, remains locked, while stacks of books wrapped in brown paper are piled up outside the door of the firm’s warehouse, where Lee was last seen in late December.

Lee told Reuters in November that “the only possible reason” for the disappearances of his associates was because of a new book they were going to publish.

Some local media said that that book was an expose on Chinese president Xi Jinping’s love life.

Lee, however, declined to give specifics at the time.