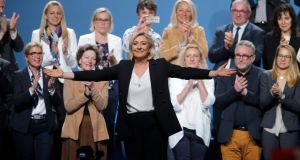 French far-right Rassemblement National leader Marine Le Pen: says Emmanuel Macron “has abandoned the concept of the office of president which is that of the Fifth Republic”. Photograph: Vincent Kessler

A frisson of fear ran through the presidential majority at the beginning of the week, when several polls briefly placed the RN list, led by Jordan Bardella, the 23-year-old former leader of the far right-wing party’s youth movement, ahead of LREM. The two parties ended the week at 22 per cent each.

By all rights the LREM, led by Macron’s former European affairs minister, Nathalie Loiseau, ought to be ahead. Macron defeated Le Pen by 66 to 34 per cent of the vote in the 2017 presidential election.

Loiseau (54) has been a high-ranking civil servant for 26 years, and knows the French and European administrations inside out. That she is threatened by a young man from the suburbs, with virtually no professional experience, shows the depth of popular rejection of those perceived to belong to the elite.

Macron lashed out at Le Pen’s party on Thursday in a press conference at the EU summit in Romania. This election is “absolutely crucial”, he said, promising to do everything in his power to prevent the RN from winning.

“I am a French and European patriot,” Macron said. “They are nationalists . . . As François Mitterrand said, ‘nationalism means war’.”

Macron had promised not to discuss domestic politics on trips abroad, but an adviser said he does not distinguish between national and European politics.

“Two years ago, the RN, which was then the Front National, said 80 per cent of their plans depended on leaving the euro . . . Now they don’t want to leave the euro. But their project is the same!” Macron said. “I don’t understand.”

The president accused the RN of advocating the “deconstruction” of the EU and propagating “disunion” with the goal of destroying the union from within.

Le Pen retaliated on France Info radio, accusing Macron of speaking as the head of a political party instead of president of all French people, whom she accused him of ignoring and even “combating”.

Macron “has abandoned the concept of the office of president which is that of the Fifth Republic”, Le Pen said. She criticised him for publishing his photograph and a short text on page 32 of LREM’s programme. He “has deliberately transformed this European election into a referendum for or against him”, she said.

It followed, Le Pen continued, that Macron “must have the honour and dignity that Gen de Gaulle had [when he resigned after losing a referendum in 1969] and leave if he loses this election.”

An adviser to Macron said the president “cannot not get involved”, because Europe is at a turning point, with its leadership, including the president of the European Commission, about to change. Macron’s party, formed after the last EU elections in 2014, has had no representation in the European Parliament until now, which limited its influence.

The adviser spoke of a “second stage” in Macron’s European engagement, marked by a shift from concentration on relations with Germany towards broader consensus within the union.

The “ritual” of Franco-German summits has become a sterile exercise in which the French president and German chancellor “meet and issue pretty communiqués . . . To read the communiqués from Franco-German summits, you would think that we had brought peace to the entire world, reformed the euro zone and relaunched growth and industry everywhere,” the adviser said.

His frankness echoed similar remarks by Macron at an April 25th press conference, when the president called differences with Germany over Brexit strategy, energy policy, climate change and trade with the US “fruitful confrontation”.

Asked what Macron meant by the promise of a “new Schengen”, the adviser said the EU must strengthen external border controls if it is to avoid restoring immigration checks at all national borders. There must be a more fair geographical distribution of immigrants, he added.

“In people’s minds, Schengen means a sieve. We may need to change the name [of the free travel zone],” the adviser said. “It should signify security and a minimum of solidarity.”

The adviser said there are three “Brexit moments” on the horizon. The first is British participation in the European parliamentary election, since it will not be possible for the UK to organise its departure from the EU by May 22nd. It was “a good sign” that the Conservative and Labour parties are in difficulty, he continued. “Voters are telling them ‘Do something. Don’t keep us in limbo’.”

The UK must decide by the end of June if the MEPs it elects will take their seats in the European Parliament.

Regarding the October 31st deadline for Brexit, the adviser said, “We must be clear. We cannot enter a cycle of repeated postponements. The British must find a solution before then.”