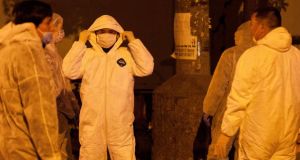 Chinese authorities slaughtered over 20,000 birds at a poultry market in the financial hub Shanghai today as the death toll from a new strain of bird flu mounted to six, spreading concern overseas and sparking a sell-off on Hong Kong's share market.

State news agency Xinhua said the Huhuai market for live birds in Shanghai had been shut down and birds were being culled after authorities detected the H7N9 virus from samples of pigeons in the market. All the 14 reported infections from the H7N9 bird flu strain have been in eastern China and at least four of the dead are in Shanghai, a city of 23 million people and the showpiece of China's vibrant economy.

The latest death was of a 64-year-old man in Zhejiang province, Xinhua said today, adding that none of the 55 people who had close contact with him had shown symptoms of infection. In Hong Kong, shares tumbled to a four-month low today on worries that the new strain of bird flu infections could become a widespread outbreak and hurt the local economy.

Chinese airlines were among the biggest percentage losers on the day, including China Southern Airlines, China Eastern Airlines and Air China. Cathay Pacific also fell. In Shanghai, the rising death toll has prompted some residents to stay away from markets with live chickens and ducks.

"I'm only getting my groceries at the large supermarkets now because I don't think it is safe to visit the wet markets anymore," said 38-year-old homemaker Shao Linxia, adding that she has also stopped buying poultry since news of the bird flu surfaced.

"We all remember Sars and how quickly it could spread, so we are obviously worried."

The 2002-2003 epidemic of Severe Acute Respiratory Syndrome (Sars) started in China and killed about one-tenth of the 8,000 it infected. Still, there were few signs of a panic in Shanghai with shops remaining open and not many people wearing face masks in public. The strain does not appear to be transmitted from human to human, but Hong Kong airport authorities said they were taking precautions. Vietnam banned imports of Chinese poultry.

In Japan, airports have put up posters at entry points warning all passengers from China to seek medical attention if they have flu-like symptoms. In the United States, the White House said it was monitoring the situation and the Centers for Disease Control and Prevention said it had started work on a vaccine if it was needed. It would take five to six months to begin commercial production.

With the fear that a Sars-like epidemic could re-emerge, China said it was pulling out the stops to combat the virus.

"(China) will strengthen its leadership in combating the virus ... and coordinate and deploy the entire nation's health system to combat the virus," the health ministry said in a statement on its website (www.moh.gov.cn).

In 2003, authorities initially tried to cover up an epidemic of Severe Acute Respiratory Syndrome (Sars), which emerged in China and killed about 10 per cent of the 8,000 people it infected worldwide. China "will continue to openly and transparently maintain communication and information channels with the World Health Organisation and relevant countries and regions, and strengthen monitoring and preventative measures", the ministry said.

Shanghai has suspended poultry sales at two other marktes and ordered through disinfection of the premises. In Huhuai, authorities were conducting proper disposal of the culled birds, their excrement and contaminated food as well as disinfection of the market, Xinhua said.

The virus has been shared with World Health Organisation (WHO) collaborating centres in Atlanta, Beijing, London, Melbourne and Tokyo, and these groups are analysing samples to identify the best candidate to be used for the manufacture of vaccine - if it becomes necessary.

Any decision to mass-produce vaccines against H7N9 flu will not be taken lightly, since it will mean sacrificing production of seasonal shots. That could mean shortages of vaccine against the normal seasonal flu which, while not serious for most people, still costs thousands of lives.

Sanofi Pasteur, the world's largest flu vaccine manufacturer, said it was in continuous contact with the WHO through the International Federation of Pharmaceutical Manufacturers and Associations (IFPMA), but it was too soon to know the significance of the Chinese cases.

Other leading flu vaccine makers include GlaxoSmithKline and Novartis Preliminary test results suggest the new flu strain responds to treatment with Roche's drug Tamiflu and GSK's Relenza, according to the WHO. Other strains of bird flu, such as H5N1, have been circulating for many years and can be transmitted from bird to bird, and bird to human, but not generally from human to human.

So far, this lack of human-to-human transmission also appears to be a feature of the H7N9 strain.

"The gene sequences confirm that this is an avian virus, and that it is a low pathogenic form (meaning it is likely to cause mild disease in birds)," said Wendy Barclay, a flu virologist at Britain's Imperial College London.

"But what the sequences also reveal is that there are some mammalian adapting mutations in some of the genes."