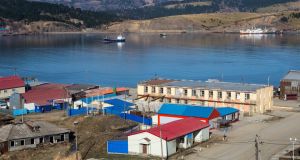 Malokurilskaya Bay on Shikotan Island, one of the Kuril islands under Russian control. Photograph: Getty Images

Russia has rejected Japan’s assertion that it was ready to loosen its grip on the Kuril islands, dashing hopes that the two countries might be close to resolving a decades-long territorial dispute over the Pacific archipelago.

President Vladimir Putin and Shinzo Abe, the Japanese prime minister, agreed during talks in Singapore in November to step up efforts to settle the conflict over the four southernmost Kuril islands that were seized by Soviet forces in the final days of the second World War. There are plans for the two men to meet in Moscow later this month to further negotiations.

Russia and Japan have a shared interest in resolving the Kurils problem, which prevents conclusion of a peace treaty formally ending the second World War and has acted as a brake on bilateral economic and political co-operation. Russia wants to tap Japanese investment in energy and technology, and Japan hankers after greater access to Siberian oil and gas resources.

Putin has called for an amicable settlement that would see Russia sign a peace treaty with Japan, and then talk about the possible return of two of the four disputed islands, including Shikotan and Habomai. Terms for such an accord were set out in a Soviet-Japanese declaration in 1956 that fell apart after the US stationed troops in Japan the following decade.

Abe has invested a large amount of political capital in ending what Japan sees as a Russian occupation of the Kurils, and has been talking up the prospects for his forthcoming meeting with Putin. In televised remarks over the new year holidays the Japanese leader asserted that 2019 would see a breakthrough in negotiations and that residents of the disputed islands should prepare for a change of ownership.

The Russian foreign ministry lost patience this week and summoned Toyohisa Kozuki, Japan’s ambassador to Moscow, to complain that Tokyo was issuing “misleading statements” in a bid to impose its “own scenario” for a resolution of the conflict.

“Russia had not changed its position that the Kurils problem could only be resolved under conditions of a qualitatively new atmosphere in Russian-Japanese relations supported by the peoples of both countries and based on the recognition by Tokyo of the outcome of World War II, including the Russian Federation’s absolute sovereignty over the southern Kuril islands.”

The ministry’s angry outburst set the stage for tense talks with Toro Kono, the Japanese foreign minister, who arrives in Moscow this weekend to prepare the ground for the Putin-Abe meeting.

However, Russia, turning east to Asia for political and economic support as relations sour with the West, is unlikely to risk alienating Japan by calling a halt to the Kuril negotiations.

Some commentators believe Putin might be ready to share control of the Kurils if Japan agrees to a set of tough demands, including the lifting of sanctions against Russia and a pledge to block any US military deployment on the islands.

The Kremlin had agreed to accelerate the Kurils peace process to sow discord in the G-7 group of developed nations that has united in opposition to Russia’s annexation of Crimea, and to force Japan to distance itself from the US, said Andrei Makarkin, a Russian political analyst. “It’s a game against America,” he told the Rosbalt news agency on Thursday.

Russia would benefit from a peace treaty with Japan that fractured international resistance to its aggressive policies in Ukraine, said Andrei Zubov, a Russian political scientist. However, it would be politically inexpedient for Mr Putin, who has positioned himself as a “protector of Russian lands” since ordering the takeover of Crimea in 2014, to surrender sovereignty of the Kurils.

“In Russia even the transfer of Shikotan and Habomai would be seen as the ‘trading of Russian lands’ and would cost Putin 20-30 per centof his [domestic approval] ratings.”

A lawmaker from Russia’s nationalistic Liberal Democratic Party tabled a bill on Thursday that would prevent parliament from approving the transfer of the Kurils to Japan. Adoption of the legislation would deal yet another blow to Abe’s hopes of regaining the islands, and limit the Kremlin’s bargaining power when dealing with Japan.