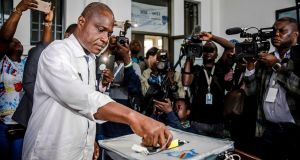 The runner-up in Democratic Republic of Congo’s presidential election, Martin Fayulu, in fact thrashed the official winner with more than 60 per cent of votes and will file a formal fraud complaint on Saturday, his camp said.

The vote had been intended as DRC’s first democratic transfer of power in six decades, but instead threatens to reawaken violence in the huge and tumultuous nation where millions have died during civil wars since the 1990s.

“When you know you are in the right, you are not allowed to remain home,” Mr Fayulu said, urging supporters to “rise up”.

Though pre-election polls predicted a landslide for Mr Fayulu, a businessman and former manager at US oil giant Exxon Mobil, the national election board (CENI) said he lost to another opposition leader, Felix Tshisekedi (55).

Mr Fayulu’s camp said on Friday its tally showed he won 62 per cent of the vote, with Mr Tshisekedi taking 19 per cent.

His supporters say authorities rigged the result in a deal to protect members of President Joseph Kabila’s outgoing administration and maintain his influence over security forces.

Mr Fayulu’s camp said it would take its case on Saturday morning to DRC’s highest court. It has asked CENI to publish results from every polling station.

“We know the constitutional court is composed by Kabila’s people, but we do not want to give any chance to Kabila and his team to say . . . you didn’t follow the law,” Mr Fayulu told the BBC.

Many Congolese fear the dispute could re-start a cycle of unrest in a country where wars causing hunger and disease have decimated the population in recent decades.

Around the nation of 80 million people that is nearly the size of western Europe, there have been isolated incidents of post-election violence.

In the northern city of Kisangani, police and army responded to student protests, and in nearby Mangobo a local ruling party office was set on fire, according to an internal U N report.

These incidents followed clashes on Thursday in Kikwit in which security forces killed four protesters.

“We want peace, because this country has already suffered a lot from all this violence,” said Kinshasa motorbike taxi driver Lambert, who declined to give his full name. “These protests should not be happening because Tshisekedi is the people’s choice.”

The officially-declared winner shot to prominence when he inherited the leadership of his UDPS party after the death of his father Etienne Tshisekedi in 2017.

His genial, uncomplicated manner and portly resemblance to his father have won him support. But he lacks the experience, clout and firebrand reputation of Etienne.

Before the vote, Mr Tshisekedi said Mr Kabila had nothing to fear should he come to power. Mr Fayulu, by contrast, is backed by ex-rebel Jean-Pierre Bemba and former governor Moise Katumbi, two of Mr Kabila’s fiercest rivals.

“The people of the Democratic Republic of Congo have waited 58 years for a peaceful democratic transfer of power, and have sacrificed too much for this election result not to reflect their votes cast at the ballot box,” said a bipartisan group of US senators late on Thursday. – Reuters