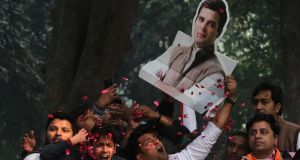 The near-certain loss, in provisional election results announced on Tuesday, would be Mr Modi’s biggest political setback since he assumed office in May 2014 and comes months before a general election due by May 2019.

According to provisional results announced by the federal election commission, the Congress Party was winning the state legislature elections in Madhya Pradesh, Chhattisgarh and Rajasthan. The commission will formally announce all results on Wednesday, after polls that took place over several weeks.

The Congress Party’s electoral success has galvanised its cadres and those of other opposition parties who were intimidated by Mr Modi’s political rock star status, indefatigable energy and fiery and persuasive oratory. Party insiders said the victories would also send out the message that Mr Modi’s BJP was not invincible.

“The Congress Party that was in the ICU has revived and shown that it is ready to battle with the BJP,” said political analyst Sagarika Ghose. The election results were a long delayed shot in the arm for the Congress, she added.

All three states voted decisively for the BJP in the 2014 general election; but the BJP’s failure in fulfilling its promises of providing employment, economic succour to farmers and the poor and overall infrastructure development, had disappointed voters.

Other controversial BJP policies such as those concerning cow protection and the imposition of demonetisation of high value currency notes in 2016, estranged the Hindu nationalist party from its voter base. The BJP’s venomous anti-Muslim outlook has also alienated it from the community that comprises some 18 per cent of the country’s population.

“The mood of the country is changing and the outcome in the three states is a clear verdict against the BJP that has failed to deliver on almost all its election promises,” said Seema Mustafa of the Centre for Policy Research in New Delhi. The disillusionment with Mr Modi had set in and could impinge it in the national polls, she added.

The Congress Party victories also raise the political profile of its leader Rahul Gandhi, the 48-year-old scion of India’s Nehru-Gandhi political dynasty, who was considered by analysts and privately by his colleagues, as an “unsubstantial” and “reluctant” politician.

“Rahul Gandhi now needs to be taken seriously by the BJP,” said political analyst Lord Meghnad Desai. He had shown that he was no longer inconsequential, he added.

The BJP, however, is taking solace from the fact that it was not entirely routed in the three states. The outcome in Madhya Pradesh, for example, is a cliffhanger, with both parties securing an almost equal 42 per cent of the states total vote share.

Furthermore, it is of the view that the Congress Party is handicapped by dynastic politics and its continuing dependence on the fading appeal of the Gandhi family.

“It remains to be seen if Rahul Gandhi has the political doggedness to follow through in the general elections,” said Delhi garment exporter Rita Paul.

Results were also announced for southern Telangana state in which the local Telangana Rashtra Samithi or TRS was winning, while in Mizoram province, bordering Bangladesh, the indigenous Mizo National Front was well ahead in the state’s 40-member assembly.