Over 140 whales die after mass beaching in New Zealand

Conservation workers ‘deeply saddened’ about 70 whales had to be euthanised

Up to 145 pilot whales have died after a mass stranding on a remote beach in New Zealand. Video: New Zealand Department of Conservation 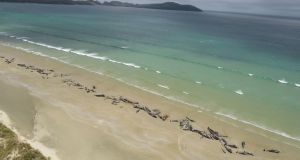 More than 100 dead pilot whales on a remote beach on Stewart Island in the far south of New Zealand. Photograph: New Zealand Department of Conservation/AFP/Getty

More than 140 pilot whales died after beaching themselves in southern New Zealand, with half being euthanised by conservation workers in a “deeply saddening” decision after their discovery came too late to rescue them, officials said Monday.

The stranding, in an isolated part of Stewart Island, off the coast of the South Island, was the largest in New Zealand since 250 pilot whales died last year in one of the worst such incidents in the country’s history.

The beached whales on Stewart Island were discovered in two separate groups, or pods, just as several other whale deaths and strandings were reported around the country over the weekend.

The Department of Conservation said Monday that as many as 145 whales beached themselves at Mason Bay, on the island’s west side, where they were discovered by a hiker Saturday afternoon.

Ren Leppens, the department’s operations manager for the island, said the hiker walked for “two to three hours” to alert conservation staff. Half of the whales were already dead by the time rangers reached the two pods, leaving the rest to be euthanised.

“It’s deeply saddening,” said Mr Leppens, who added that the whales, which might have been stranded as early as Friday, had “started to get covered in sand” by the time they were found.

Poor weather meant that experts could not be flown in to figure out how to help rescue the whales, so euthanising them was the only option, he said.

Mr Leppens said the beach was the site of three previous mass strandings. More than 300 whales beached themselves at Mason Bay in 1998.

The Department of Conservation said the events are believed to happen when whales make navigational mistakes while chasing prey, escaping predators or trying to protect sick members of the group, but more than one factor could contribute.

Last February, 250 whales died after hundreds became beached at Farewell Spit, one the most common locations for whale strandings in New Zealand. They died after 500 rescuers frantically tried to refloat the animals. Krista Hupman, a marine mammal biologist for the National Institute of Water and Atmospheric Research in New Zealand, said whale conservation groups kept a close eye on Farewell Spit and were ready to convene rescue teams at short notice when the animals appeared to be swimming toward the coastline.

“But without that initial sighting, we’re out of luck,” she said, referring to the remoteness of the stranding at Stewart Island, which is home to just 402 people. At the opposite end of the country, rescuers at Ninety Mile Beach, near the northern tip of the North Island, delayed efforts to refloat eight stranded pygmy killer whales until Tuesday because of bad weather. Four whales had died on the beach as of Monday. Two other whales beached themselves elsewhere in New Zealand, officials said.

The Department of Conservation said the deaths were “unlikely to be related,” and Hupman, the whale biologist, said strandings were common in New Zealand at this time of year.

While New Zealand is known to have an unusually high number of whale strandings, she said, scientists did not know why they were so frequent, the reasons behind them, or whether refloating the animals was the best way to respond.

Mr Leppens, the Department of Conservation operations manager, said that the remote location meant conservation staff would leave the whales on the beach to decompose and “let nature take its course.”

But the exact circumstances of the stranding remained a mystery. “The sooner technology can race forward and give us a better idea of why this happens, the better,” he said. – NYT