We are ready for Brexit talks, says EU’s chief negotiator

Michel Barnier plays down suggestions talks with UK may collapse, as EU agrees position ahead of June negotiations 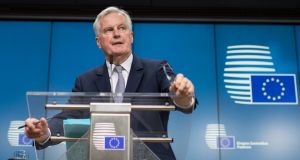 EU Brexit negotiator Michel Barnier, speaking in Brussels on Monday, said he hoped to begin the first round of talks with Britain in the week of June 19th. Photograph: Jasper Juinen/Bloomberg

The European Union has agreed its Brexit negotiating stance, clearing the way for talks to begin with the British government in mid-June.

Michel Barnier, the EU’s Brexit negotiator, said he hoped to begin the first round of talks in the week of June 19th, while playing down suggestions negotiations could collapse.

“From the day the UK decided to leave, the EU has gone through an intense preparatory process,” Mr Barnier said. “We are ready and well-prepared.”

Meeting in Brussels on Monday, the EU’s 27 Europe ministers agreed unanimously on the bloc’s “negotiating directives”, a more detailed version last month of the strategy laid down by heads of state and government .

The key directives are laid out in an 18-page document intended to cover the first phase of the Brexit talks. Many areas, services for example, will be covered later.

The document voted through by the European parliament confirms:

- Britain will leave the EU on March 30th, 2019, at midnight Brussels time, unless the EU27 agrees unanimously to extend talks.

- The status of EU citizens (3.5 million EU citizens in the UK and 1.2 million Britons on the continent) is the EU’s top priority. The Brexit agreement must ensure “effective, enforceable, non-discriminatory and comprehensive guarantees” for those people and their families.

- There is no mention of the €100 billion Brexit bill (or any other number). Instead, the EU states that Britain will have to agree on a “single financial settlement” covering the EU budget and British contributions to the European Investment Bank and other common funds.

- The EU’s hope of avoiding a hard Border on the island of Ireland, while “respecting the EU’s legal order”, meaning customs checks will have to be in place, if the UK leaves the customs union.

- The EU wants to ensure that any future British government can be held to account if it fails to uphold the Brexit agreement: it proposes “an institutional structure to ensure an effective enforcement of the commitments” and refers to the importance of the European court of justice.

Agreement on the text came after the British Brexit secretary, David Davis, warned the UK could walk away from the talks over a reputed €100 billion Brexit bill.

Mr Barnier, who knows Mr Davis from their time as EU affairs ministers in the mid-1990s, played down suggestions the talks could collapse. “I heard David Davis, who I know well. He evoked the hypothesis of ‘no deal’. That is not my choice,” he said.

The former French foreign minister urged the British to keep a sense of perspective and look ahead to the future trade deal.

“It will be difficult, there will be moments of tension, but we must keep things in perspective ... to organise the retreat orderly, which the UK has asked for, by making its choice [in the referendum]. I recommend that no one forgets about the perspective of the new partnership.”

The EU is insisting the UK settle its share of the union’s debts, resolve the status of EU citizens and the Irish border, before moving on to talks on the future relationship – a sequence that was reaffirmed by ministers on Monday.

“It is the UK which is leaving the EU and not vice-versa,” Barnier said. “We have clearly, the 27, confirmed that position that we must defend ... a negotiation is a negotiation.”

Following a disastrous dinner at 10 Downing Street attended by European Commission president Jean Claude Juncker, EU sources warned that the chances of Britain crashing out of the EU without a deal were higher than 50 per cent . Tensions have remained high, after prime minister Theresa May accused Brussels of meddling in the British election.

Mr Barnier promised that more detailed negotiating documents would be sent to the British government “very quickly” after the election. Experts from the EU’s 27 member states will meet on Tuesday for the first meeting of a Brexit working group, to help prepare these texts.