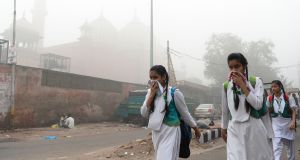 Indian schoolchildren cover their faces as they walk to school amid heavy smog in New Delhi on November 8th, 2017. Doctors are warning of a public health emergency. Photograph: Sajjad Hussain/AFP/Getty

Authorities in India’s capital New Delhi have shut down schools, put construction projects on hold and advised residents to stay indoors as part of an emergency plan to deal with dangerously high levels of pollution in the city.

The toxic air in Delhi, one of the world’s most polluted cities, is 16 times above permissible limits, leaving nearly 20 million residents gasping for breath.

A thick, soupy haze has enveloped the capital since the weekend, with people venturing out with gas masks and others with their mouths covered with scarves and handkerchiefs.

Some 300 flights and hundreds of rail services were delayed on Wednesday by several hours and traffic crawled across the city, as visibility was reduced to a few hundred metres.

The Indian Medical Association said Delhi was in the midst of a “public health emergency” and appealed to the local government to halt all sports and outdoor activity involving schoolchildren and the elderly.

It also called upon the authorities to cancel the annual Delhi half-marathon, scheduled for November 19th, as the acrid air would adversely affect the participants.

Levels across Delhi of PM2.5 fine particles – linked to higher rates of respiratory ailments, lung cancer and heart disease – averaged about 800, compared with normal levels of no more than 60.

In some places in north Delhi, they even touched levels of 1,000, the equivalent of smoking at least 50 non-filter cigarettes per day.

Delhi’s air-quality index generally worsens with the onset of winter, particularly after the annual Diwali festival of lights, when millions of people let off highly polluting crackers.

But pollution this year has been dire as farmers in neighbouring states burned crop stubble after the paddy harvest ahead of planting wheat, trapping smoke and pollutants in cooling temperatures. Fine dust, sand and cement particles from construction sites only added to the pollution.

Meanwhile, on Tuesday, Belgium’s King Philippe and Queen Mathilde, in India on a week-long state visit, inspected a military guard of honour at the sprawling sandstone presidential palace in Delhi under a cover of smog that limited visibility.

And Britain’s Prince Charles and his wife, the Duchess of Cornwall, landed in Delhi on Wednesday evening in thick fog, triggering a stream of jokes on social media. “Prince Charles lands in Delhi and is seen here squinting to see whose hand he is shaking,” tweeted Kabir Taneja, while another tweet sardonically noted that Delhi’s haze must make the Prince of Wales nostalgic about the London smog during his youth in the 1950s.