Demonstration outside Kathmandu parliament as quake death toll rises to 5,238

Nepalese authorities and local residents start to clear out the ruins around Kathmandu's Nandi Keshwar Mahadev Temple in the search for bodies. Video: Reuters 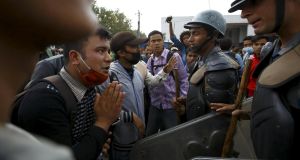 An earthquake victim requests help from a member of the Nepalese Armed Police Force while protesting against the government’s lack of aid provided to the victims in Kathmandu on Wednesday. Photograph: Navesh Chitrakar/Reuters 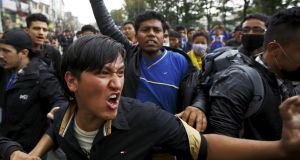 Earthquake victims chant anti-government slogans while protesting against the government’s lack of aid provided to the victims in Kathmandu on Wednesday. Photograph: Navesh Chitrakar/Reuters 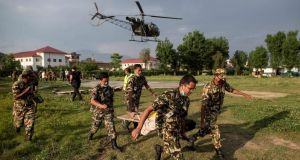 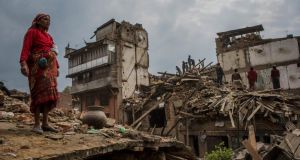 A woman stands amidst the damage to a neighbourhood in Bhaktapur in Nepal where residents are working to recover personal belongings from their severely damaged homes. Photograph: Daniel Berehulak/The New York Times.

Nepali villagers have blocked trucks carrying supplies for earthquake victims, demanding the government do more to help after last week’s disaster left more than 5,200 people dead and tens of thousands homeless and short of food and water.

In the capital Kathmandu, about 200 people protested outside parliament, asking for more buses to go to their homes in remote parts of the Himalayan nation and to hasten the distribution of aid that has reached the country but has been slow to reach those in need.

Police were deployed as anger and frustration mounted steadily in the city.

In Sangachowk village in one of the worst-hit districts, about three hours by road from the capital, scores of angry villagers blocked the road with tires.

They stopped two trucks headed for the district capital with rice, noodles and biscuits. Later, they blocked a convoy of three army trucks with relief supplies, leading to a stand-off with armed soldiers.

“We have been given no food by the government,” said Udhav Giri (34). “Trucks carrying rice go past and don’t stop. The district headquarters is getting all the food.”

The Nepal government is struggling to fully assess the devastation wrought by Saturday’s 7.8 magnitude quake.

“This is a disaster on an unprecedented scale. There have been some weaknesses in managing the relief operation,” Nepal’s communication minister Minendra Rijal said late on Tuesday.

An official from Nepal’s home ministry said the number of confirmed deaths had risen to 5,238 by Wednesday night.

Almost 10,350 were injured in Nepal as a result of the disaster, while more than 80 were killed in India and Tibet.

Prime minister Sushil Koirala earlier told reporters that the death toll could reach 10,000, with information on casualties and damage from remote villages and towns yet to come in.

That would surpass the 8,500 who died in a 1934 earthquake, the last disaster on this scale to hit the Himalayan nation of 28 million people located between India and China.

However, there were signs that Kathmandu was slowly returning to normal. Some people prepared to head home to sleep after spending the last four nights in the open, out of fear their damaged homes may not be able to withstand aftershocks.

Others prepared to sleep under makeshift tents for the fourth night in a row . 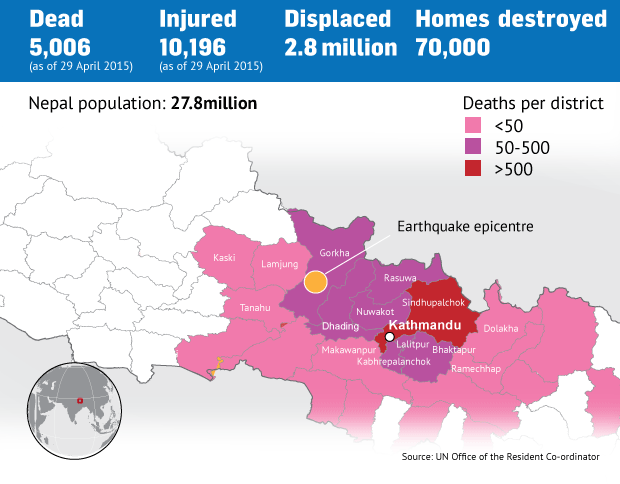 Some street vendors started selling fruit in the city, but others said they were too scared to open shops because buildings had been so badly damaged.

“I want to start selling. I have children at home, but how can I open a shop where it is risky for me to sit inside?” said Arjun Rai, who runs a general store.

In Kathmandu and other cities, hospitals quickly overflowed with injured soon after the quake, with many being treated out in the open or not at all.

Guna Raj, who works for a Kathmandu-based NGO specialising in providing sanitation, said there have been outbreaks of diarrhoea in relief camps because of a shortage of toilets and clean water.

“In the next few days or weeks I am sure there will be an outbreak of epidemics,” said Raj.

Elsewhere, members of Israeli search-and-rescue group Magnus said hundreds of tourists, including about 100 Israelis, were being airlifted out of Langtang in Rasuwa district, a popular trekking area north of Kathmandu that was hit by a fresh avalanche on Tuesday.

Fights had broken out there because of food shortages, Magnus team member Amit Rubin said. “Villagers think the tourists are taking too much food,” Rubin said.

One of the trekkers said there had also been scuffles over places on the rescue helicopters.

Rescuers also reported that tensions between foreigners and Nepalis desperate for relief were starting to rise, as fresh avalanches were reported in several areas.

Aid reached the hilly Gorkha district near the epicentre of the earthquake for the first time on Wednesday. Residents in the decimated mountain village of Gumda pleaded for food, shelter and anything else the helicopter might have brought during an in-and-out run.

Entire clusters of homes were reduced to piles of stone and splintered wood in the Gorkha region and orange plastic sheets used for shelter now dot the cliff sides and terraced rice paddies carved into the land.

“We are hungry,” cried a woman who gave her name only as Deumaya, gesturing towards her stomach and opening her mouth to emphasise her desperation. Another woman, Ramayana, repeated the plea: “Hungry! We are hungry!”

Food was not the only necessity in short supply in the area, which is beyond the reaches of paved roads, electricity poles and other facilities.

Water is scarce, communications are a challenge and modern medical care is a luxury many in the Gorkha district have never known.

A health official in Laprak, a village in the district best known as the home of Gurkha soldiers, estimated that 1,600 of the 1,700 houses in the village had been razed.

In Sindhupalchowk, about 3-and-a-half hours by road northeast of Kathmandu, the earthquake was followed by landslides, killing 1,206 people and seriously injuring close to 400.

In other remote areas where rescue helicopters were unable to land, soldiers had started to make their way overland, first by bus, then by foot.

Experts from a Polish NGO that has an 87-strong team in Nepal have said the chances of finding people alive in the ruins five days after the quake were “next to zero”.

Nepal’s foreign secretary Shanker Das Bairagi appealed for specialist doctors from overseas, as well as for search-and-rescue teams, despite earlier suggestions from officials that Nepal did not need such assistance.

“Our top priority is for relief and rescue teams. We need neurologists, orthopaedic surgeons and trauma surgeons,” Bairagi said.

Disbursement of international aid has been slow, partly because aftershocks have sporadically closed the airport.

Aftershocks, severe damage from the quake, creaking infrastructure and a lack of funds have complicated rescue efforts in general.

On Tuesday, the head of the United Nations Development Programme in Nepal told reporters that Kathmandu had told aid agencies it did not need more foreign rescue teams because its government and military could cope.