More violent clashes in Hong Kong despite prospect of talks 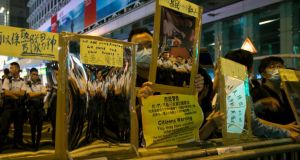 Police officers are reflected on reflective materials held by a pro-democracy protesters on a blocked road at Mongkok shopping district in Hong Kong.

It seems that every time the Occupy Central movement loses impetus, the government galvanises the protesters’ resolve by either cancelling talks or stepping up the police crackdown. The protesters are angry at a decision by China’s National People’s Congress in Beijing to allow only candidates vetted by the central government to stand in elections in Hong Kong in 2017, even though Hong Kong’s Basic Law allows for greater representation.

There are signs of fatigue among Hong Kong’s 28,000 police officers, who have been trying to contain a student-led movement that has maintained the pressure over the past three weeks, focusing on weekend activit, to push for more democracy. The protests represent one of the biggest challenges for China since the brutal crackdown on democracy demonstrations in Beijing in 1989.

It is also the most serious crisis facing the authorities since Hong Kong reverted to Chinese rule in 1997.

The focus of the occupation movement has been the Admiralty area of downtown Hong Kong, beside government headquarters. However, an area emerging as a flashpoint is Mong Kok, in Kowloon, a working class disrict where protesters have held off police efforts to end their show of strength.

About 20 people were injured after police used pepper spray and batons there after midnight yesterday.

Shouting “triads” and “black police”, demonstrators, wielding the umbrellas that have become the trademark of the protest, ran at the police lines.

Another row seemed to be brewing after Mr Leung appointed one of his election-campaign advisers, Leonard Cheng Kwok-hon, as mediator in talks between the protesters and the government.

Mr Cheng, who is president of Lingnan University, promised he would be impartial, but this is unlikely to go down well with the student protesters.

Mr Leung’s chief secretary, Carrie Lam, said on Saturday that talks between student leaders and the city government would take place for two hours on Tuesday and be broadcast live.