Rescue of boys should be expedited before downpours in next few days, says minister

Footage released by the Thai Navy Seals shows the moment that 12 boys and their football coach, who were lost in a cave in Thailand over a week ago, are found. Video: Thai Navy 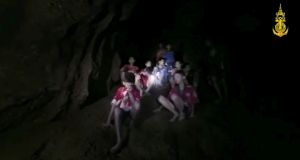 Boys from an under-16 soccer team and their coach wait to be rescued after they were trapped inside a flooded cave in Chiang Rai, Thailand. Photograph: Reuters 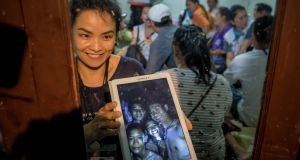 Relatives of the missing boys show photos of them after they were found alive in the cave on Monday. Photograph: Linh Pham/Getty Images 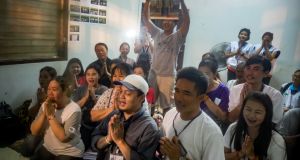 Relatives of the missing boys and their coach pray for them after they were found alive. Photograph: Linh Pham/Getty Images 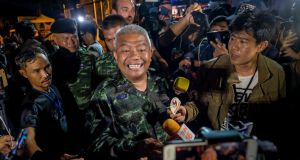 General Bancha Duriyaphan speaks to the press after the 12 boys and their soccer coach have been found alive. Photograph: Linh Pham/Getty Images

Thai authorities are racing against the clock to rescue 12 boys and their football coach trapped in a cave, saying they may attempt to evacuate the group before a fresh round of monsoon rains expected this week.

The group had been missing since finishing football practice on June 23rd, and were found alive late on Monday after a nine-day search.

A Thai navy Seal team on site sent out a request for donations of small full-face diving masks after it was found that the masks they had were too big for the children, fuelling speculation that a rescue attempt was imminent. A full-face mask is easier to use for inexperienced divers, and it has been reported that none of the children can swim or dive, which greatly increases the risk involved.

“As rain is forecast in the next few days, the evacuation must speed up. Diving gear will be used. If the water rises, the task will be difficult. We must bring the kids out before then,” said Anupong Paojinda, the interior minister, according to the Bangkok Post .

“Diving is not easy. Those who have never done it will find it difficult, because there are narrow passages in the cave. They must be able to use diving gear. If the gear is lost at any moment, it can be dangerous to life.”

The children were found in a weakened state but none were critically injured, according to officials. Doctors have visited them and workers have delivered energy gels to the group in an attempt to boost their strength. Meals of pork and rice in sealed containers were being prepared. The group is between 800m and 1km below the surface, and roughly 2km inside the cave.

Rescue experts have suggested the safest option would be to supply the children and their coach with food and medical supplies and wait for the water level to subside, which could take weeks or even months. But the expected heavy rainfall could complicate the equation.

Even evacuating the boys using diving gear could take up to five to seven days, and experienced divers have said missteps underwater with untrained divers could be fatal for the boys and the rescuers .

“The best option is to leave them where they are and stabilise their environment to make sure the core ingredients are met,” said Peter Wolf, the national director of the Cave Divers Association of Australia. “Given the environment is pretty wet, to keep them warm and dry, provide them with clean drinking water, food, and clean air.”

Rescue workers were scouring the hills above the cave network for other possible entry points or avenues to drill down to the trapped footballers.

The decision about when and how any rescue attempt is made lies ultimately with the Thai military. The Thai navy captain Anand Surawan has previously said: “[We will] prepare to send additional food to be sustained for at least four months and train all 13 to dive while continuing to drain the water.”

An underground headquarters has been set up stocked with dive gear, oxygen tanks, medical supplies and food, which will be transported to the boys and their coach.

A team of two British divers found the team on a mud bank inside the cave about two metres above the water level. “How many of you?” one rescuer with a British accent asked. Told 13, he replied: “Brilliant!”

It is thought the 12 boys and their coach entered the cave on June 23rd, before a sudden monsoon flooded the network. The wet season typically lasts from May to October in northern Thailand, where the Tham Luang cave is located on the borders of Myanmar and Laos.

Thai police are investigating whether the coach should face criminal charges for leading the boys into the cave, Sky News reported. Warning signs discourage visits to the cave during the rainy season. Tham Luang cave is one of Thailand’s longest and toughest to navigate, with snaking chambers and narrow passageways.

Despite the looming difficulties, the news that the 12 children and their coach were alive sparked intense hope across Thailand, and an outpouring of gratitude for rescue workers online. Phototgraphs of the two British divers, Rick Stanton and John Volanthen, were widely circulated on Twitter with messages of thanks, while many on social media highlighted the international nature of the rescue effort.

The Thai prime minister, Prayuth Chan-ocha, held a telephone conference to congratulate the rescuers at the cave site.

Engineers have been pumping water out of the cave for a week, and a temporary respite from the rains has also lowered water levels. By Tuesday they were removing 10,000 litres of water an hour, lowering the water level by a centimetre an hour. But coming monsoon rains could quickly erase that progress. Officials were also installing telephone lines to allow the children to speak to their parents.

More than 1,000 Thai military personnel are at the site, as well as teams from seven countries including the UK, US and Australia. – Guardian