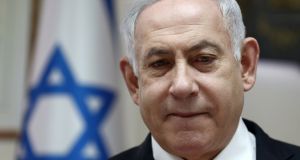 A victory would mean that Binyamin Netanyahu will lead Likud during March elections, Israel’s unprecedented third election in less than a year. Photograph: Gali Tibbon/Pool/AFP via Getty

Israeli prime minister Binyamin Netanyahu has declared victory in his primary election battle for leadership of the Likud party.

He made the declaration in a tweet just over an hour after polls closed.

A victory would mean that Mr Netanyahu will lead Likud during March elections, Israel’s unprecedented third election in less than a year.

“A tremendous victory!” the prime minister wrote on Twitter. “With God’s help and yours, I will lead Likud to a resounding victory in the upcoming elections and continue to lead Israel to unprecedented achievements.”

He defeated former cabinet minister Gideon Sa’ar, who mounted a rare challenge to Mr Netanyahu after the prime minister failed to form a government following two inconclusive elections this year. – AP and Bloomberg