Opinion: German honesty about and repentance for its actions prepared the way for European peace 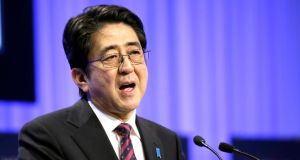 The Yasukuni Shrine, where 14 Class A war criminals and over 1,000 Class B and Class C war criminals (defined as those who committed “crimes against peace” and “atrocities against humanity”) convicted by the International Military Tribunal for the Far East are enshrined, was a spiritual instrument and symbol of Japanese militarism in Japan’s wars of aggression and colonial rule in the second World War.

On December 26th, 2013, Japanese prime minister Shinzo Abe paid homage to the Yasukuni Shrine, which once again besmirched the memories of Asian peoples who suffered unspeakable losses and miseries from Japan’s aggressive wars. Anyone with memories of the painful anti-fascist struggles or knowledge of modern European history would find it easy to understand their disappointment and indignation at Mr Abe’s flagrant act. If you don’t, just imagine how you’d feel about the sight of the incumbent German chancellor paying homage to Adolf Hitler, out of apathy and disrespect to those victimised by the Nazis during the second World War.

The German government and the German people deserve a great deal of respect for their attitude towards history. Over 43 years ago, on December 7th, 1970, Willy Brandt, then chancellor of the Federal Republic of Germany, knelt down in profound apology in front of the monument to the Warsaw Ghetto uprising. This impressive gesture boded well for a brand new chapter of German and European history, for Brandt’s kneeling down in penitence helped guide Germany out of the defendant’s seat.

Not only have successive German governments admitted Germany’s war crimes and sincerely apologised to Nazi victims; they have all made unequivocal denunciations of Nazism. Germany’s repentance and apologies were an essential contributing factor in genuine reconciliation in Europe, as well as the restoration of faith in peace and a shared future in the hearts of European peoples.

Almost 69 years has passed since the war ended in 1945, yet the Japanese government has never faced up squarely to Japan’s war-waging and misery-inflicting past, has never conducted conscientious introspection and earnest reflection; nor has it made an official apology. Instead, Japanese prime ministers and some other cabinet members have on numerous occasions paid visits to the Yasukuni Shrine honouring as “heroes” the culprits and commanders of Japan’s wars of aggression, who caused terrible suffering to millions of people in Asia.

A handful of extreme right-wing forces blatantly altered history coursebooks, seeking to depict the Japanese wars of aggression as the “liberation” of backward nations, and attempting to reinterpret bloody massacres as “a self-defensive holy war”. The Yasukuni Shrine, where militarism is advocated and war criminals are honoured, received 33 visits from eight Japanese prime ministers (out of 12) in the three decades after the end of the war (1945-1975), and 27 visits from Japanese prime ministers in the decade between 1975 and 1985, including six visits deliberately made on August 15th, to mark the date when Japan surrendered. In 1985, right-wing forces in Japan exerted even greater pressure, and prime minister Yasuhiro Nakasone took the entire cabinet to pay official homage to the shrine. Since Mr Abe took office as prime minister, he has not only openly questioned whether Japan should be defined as an “aggressor”, he has also attempted to portray China as a threat; he even posed for a photo in a military jet marked with the provocative number 731 - the code of an infamous Japanese biological warfare research facility performing human experiments in China during the war. This time he visited the Yasukuni Shrine in disregard of international opposition, and, even more alarmingly, he has voiced his wish to amend the post-war pacifist constitution imposed on Japan by the United States.

“It is not that I’m reluctant to let go of the past. I have many Japanese friends. I have great respect for Japanese culture and religious beliefs. However, when I see the Japanese prime minister and other Japanese politicians bowing solemnly and respectfully to honour the convicted war criminals, I can only shudder with fear, grief and indignation.” This is a comment made by a Chinese man orphaned in the Nanjing Massacre of December 1937, in which over 300,000 defenceless residents of the ancient city of Nanjing were killed and over 20,000 women were raped and one third of the city consumed by fire. The horrible massacre was but the tip of an iceberg - in the eight years of China’s struggle against the Japanese aggressors, total Chinese casualties amounted to 35 million.

Those eight years (1937-1945) were the darkest period in China’s long history. The atrocities committed by Japanese militarists - massacres, torture, rape, and live human experiments of biological warfare - constituted a man-made disaster for the Chinese nation and others. Many people still have bitter memories of losses suffered in Japan’s military attacks on Peal Harbor, the Philipines, Burma, Singapore and so on. Even British troops suffered thousands of casualties in the Pacific War. No one would wish to see such calamities repeated in human history.

I harbour respect and appreciation for Japanese culture, which has thrived with numerous Chinese elements learned from China’s Tang dynasty. I surely understand that even war criminals and their families are entitled to human rights. I know that a majority of the Japanese people have a clear and sober understanding of Japanese history, and that they have an earnest yearning for lasting peace. However, I can hardly hide or stay silent about my profound disappointment with the Japanese leaders, who neither have shown penitence nor have the decency to admit past wrongdoings, draw lessons from history or strive for forgiveness. I cannot but join those with conscience and integrity in opposing and condemning the flagrant, provocative act of a head of government paying homage to the souls of militarists. The resurgence of militarism in Japan, as evidenced by Mr Abe’s track record, not only appalls those Asian nations once ravaged by the Japanese empire, but also further diminishes the chances of a genuine Asian reconciliation. This evil trend should be a cause for grave concern amongst people throughout the world who cherish peace and uphold justice.

Among the many qualities shared by the Irish and Chinese peoples is a deep love of peace. Both were victimised by foreign aggressors – imperialists and colonialists. Both understand that without a correct attitude toward history, there can be no lasting peace to speak of. Queen Elizabeth II touched millions of Irish souls by visiting the Garden of Rememberance in Dublin on May 17th, 2011, laying a wreath and bowing to honour those who died for Irish freedom. This historic gesture played a remarkable role in reconciliation between the Irish and the British. It does not take a great stretch of imagination to see that a similar gesture by a Japanese prime minister would considerably improve Japan’s relations with its neighbours. Together with an unreserved, sincere apology, it would perhaps help heal the terrible wounds that have been repeatedly ripped open by Mr Abe and his predecessors in the past seven decades.

Whether the Japanese prime minister should visit the Yasukuni Shrine is a major issue of right and wrong that concerns aggression vs anti-aggression, good vs evil, and light vs darkness. In the light of Mr Abe’s lamentable choice of aggression, evil and darkness, I hope the Irish people will speak up on such an issue and make their voices heard.

Today, I would like to call on Japan to acknowledge history without bias or distortion, to indulge in profound introspection, to make sincere apologies to its neighbours in the Asia-Pacific region and to unequivocally and irreversibly renounce militarism, which up to this day has haunted millions of people across the globe. I call on Japan to take concrete action to show its sincerity by following a path of peaceful development, promoting Asian reconciliation, and safeguarding world peace. I call on Japan to do what it can in penitence and atonement to wash away memories of the sins and crimes committed by Japanese militarists, and to prevent militarism and fascism from coming back.

To Prime Minister Abe, I would say: You ought to give belated closure to the governments and peoples of all those Asian countries once abused and humiliated by Japanese troops commanded by militarists by making solemn and sincere apologies on behalf of Japan; you should also apologise to the Japanese people for not having given them an opportunity earlier to vacate the defendant’s seat of history’s trials, to say goodbye to the past, and to join hands with other Asian nations to build a peaceful, prosperous and harmonious Asia.

A shorter version of this article appeared in the Irish Times print edition of January 24th, 2014.