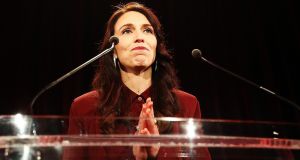 New Zealand’s ruling National Party won the largest number of votes in the country’s general election on Saturday, securing a comfortable margin over the Labour Party after what had promised to be the most hotly-contested race in recent history.

National and Labour had been almost neck-and-neck in opinion polls ahead of the vote, with charismatic 37-year-old Jacinda Ardern almost single-handedly dragging Labour back into the race after taking over the party’s leadership in August, a phenomenon referred to as “Jacindamania”.

National took 46 per cent of the vote on Saturday, the Electoral Commission said, while support for Labour was 35.8 per cent. A final tally including overseas votes will be released on October 7th.

The results set up the nationalist New Zealand First party to hold the balance of power and form the next government. It received 7.5 per cent of the ballot.

Veteran New Zealand First leader Winston Peters has been minister under both parties and has not said which party he would favour as a coalition partner. Previously he has backed the party with the largest number of votes.

All party leaders said they would have conversations over the next few days, with some of them already trying to woo Peters on election night.

“I want to acknowledge the strong performance of Winston Peters and New Zealand First,” National Party leader Bill English said in a speech to his supporters.

“The voters of New Zealand have given New Zealand First a role in forming the next government,” he said.

For English, who campaigned heavily on National’s economic credentials after taking the party leadership last year, the strong showing was a vindication, after National crashed to its worst-ever election result in 2002 under his first stint as leader.

Opinion polls leading up to the vote had been volatile, with two recent ones giving National a near 10-point lead over Labour. National has been in power for nearly a decade.

“Bill English and National have taken the largest number of votes. I’ve called Bill and acknowledged that,” Ms Ardern told her supporters, adding that she was planning conversations with both the Greens and New Zealand First. “It’s not over yet.”

Mr Peters sounded buoyant but kept his cards close to his chest.

“We have been strong enough and honest enough with our supporters to make it home,” he said.

New Zealand First had “not all the cards, but we do have the main cards”, he said, adding that he would not be rushed into giving any answers immediately.

Ardern and English were expected to maintain fiscal prudence, but to differ on monetary policy, trade and immigration.

New Zealand uses a proportional representation system in which a party, or combination of parties, needs 61 of parliament’s 120 members to form a government.

The results secured 58 seats for National in parliament, and 45 for Labour. New Zealand First has nine seats and the Greens, who won 5.8 per cent of the votes, have seven.

National’s 58 seats were higher than those of Labour and the Greens put together, but neither combination had enough to govern on their own.

“It’s all over, bar the special votes - but even they won’t change the basic maths. They won’t change any crucial seats and National is extremely unlikely to go up. So Winston Peters rules,” said Bryce Edwards, analyst at Wellington-based Critical Politics.

A record 1.2 million ballots were cast before the day of the election, accounting for about one-third of the 3.3 million New Zealanders enrolled to vote.

“Special votes” include ballots from New Zealanders overseas and those who vote outside their home constituencies.

These are estimated to represent 15 per cent of total votes and could have a considerable impact.

“I would expect us to get a bit of a lift out of those special votes,” said Ms Ardern.