Ukraine elite must change or prepare to be ousted - Saakashvili 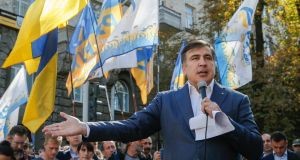 Former Georgian leader Mikheil Saakashvili made a typically flamboyant return to Kiev on Tuesday, telling a crowd outside the presidential administration that Ukraine’s political elite must change its ways or prepare to be ousted.

President Petro Poroshenko annulled Mr Saakashvili’s Ukrainian passport in July, but nine days ago his supporters helped him push past police on the Polish border and re-enter the country where he served as governor of the Odessa region in 2015-16.

Claiming that “the people” swept him back into Ukraine, Mr Saakashvili visited western regions last week to rally support for his campaign to remove corrupt politicians and relaunch faltering reforms.

“I have one ambition in Ukraine – not to have an official post, but to put things right and to raise up the people,” he told a few dozen flag-waving supporters and a scrum of reporters and photographers outside Mr Poroshenko’s headquarters.

“I don’t have a personal conflict with Poroshenko . . . but he is one part of a system that I have problem with, with them and with the oligarchs that are killing Ukraine.”

He invited Mr Saakashvili (49) to govern Odessa, but the man who ran Georgia for nearly a decade resigned after only a year, saying the president and his allies had no real interest in fighting the region’s rampant corruption and organised crime.

The leader of Georgia’s 2003 Rose Revolution formed a new political party, but two months ago Mr Poroshenko cancelled his Ukrainian citizenship due to alleged irregularities on his application form.

Meanwhile, Georgia has again asked Kiev to extradite its former president to face charges including abuse of power – allegations which Ukraine rejected in previous years as politically motivated.

Pointing to widespread dissatisfaction with the pace of reform and pressure on critical media and civil society groups, Mr Saakashvili accuses Ukraine’s leaders of trying to crush potential rivals before elections due in 2019 – even though polls earlier this year suggested he and his party had little support.

“Those polls were taken when we were blocked from all media. And the same polls showed that no party had more than 8-9 per cent support,” Mr Saakashvili told The Irish Times as he walked with supporters and press through central Kiev.

“Secondly, Poroshenko gave me such a huge gift by making me so important now – I don’t know what he was thinking. He obviously didn’t believe the polls himself, so he took that decision and it backfired,” he said of the cancellation of his passport and efforts to stop him returning to Ukraine.

While fighting an administrative charge over his border crossing and vowing to regain his passport through the courts, Mr Saakashvili said he would keep touring Ukraine to gather people’s views and support for peaceful change.

He plans to join a rally in Kiev on October 17th, when opposition parties and civil society groups are expected to demand swift action on anti-corruption reforms and the removal of deputies’ immunity from prosecution.

“If they accept our demands . . . then let them stay [in power] for another two years,” until the scheduled elections, Mr Saakashvili said.

“If they don’t do that, then I don’t see how the people will just tolerate their presence without any visible signs of change,” he added.

“Every Ukrainian autocrat has failed miserably when he has counted on the passivity of these people. Every time, they gamble on the hope that the people will be tired and fed up. They might be fed up, but it doesn’t mean they’ll be passive.”