Europe Letter: Ireland should get two additional seats as a result of UK departure 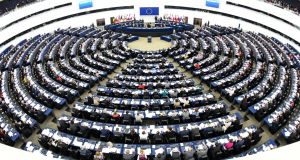 MEPs vote on the future composition of the European Parliament after Brexit in Strasbourg on Wednesday. Photograph: Patrick Seeger/EPA

With European Parliament elections just over a year away, MEPs have been in pre-election mode this week in Strasbourg preparing the ground for a UK-less chamber – redistributing the British seats.

They have also been telling heads of government they intend once again to insist on their right to have a say over who gets to be the next president of the European Commission.

The good news for Ireland is that it should get two additional seats if, as expected, the EU summit at the end of the month endorses the MEPs’ reallocation.

Although the new seats come into play only if the UK does actually leave the union next March, the Government is expected to convene a constituency commission well ahead of that to redraw the Irish constituencies, which are expected to revert from three to four.

Irish representation will rise from to 11 to 13 as overall MEP numbers under the proposals will be cut from 751 to 705.

MEPs also suggested that 46 seats be allocated either to potential new members, or, for the first time, to a pan-EU list to be voted on throughout the union.

The latter proposal, however, is certain to fall at the summit – although enthusiastically endorsed by France’s Emmanuel Macron and backed by Taoiseach Leo Varadkar, the Visegrad countries of central Europe have already agreed to vote it down. Unanimity rules.

The all-Europe list, described as a celebrity beauty line-up that would be dominated by the big countries and populists – or rock stars and footballers, according to one critic – is opposed by Varadkar’s party colleague Seán Kelly, an MEP for Ireland South, who has made a Facebook video attacking the idea.

Two other MEPs, Fine Gael’s Brian Hayes and Sinn Féin’s Matt Carthy, say the vast all-European constituency would only contribute to making MEPs yet more remote from their constituents.

MEPs were also leaving leaders no choice about how the president of the commission would be appointed. They pledged not to endorse any candidate who had not come through the so-called Spitzenkandidat system, which in the last election gave us Jean-Claude Juncker.

The Spitzenkandidat process, a commonly used German word for the “lead candidate”, requires the political parties in the parliament to nominate their candidate for the presidency as part of the election campaign. The party that comes out on top, with or without a majority, then gets the job.

Its advocates claim that the process introduces a measure of accountability into the selection of the head of the commission and takes away from the traditional, cynical, horse-trading carve-up of EU posts by the heads of government.

They are required by the treaty, acting by qualified majority, only “to take into account” the result of the European elections.

Although Varadkar and Juncker, among others, have backed the process, the majority of the European Council, including Macron as well as the leaders of the Czech Republic, Hungary, Lithuania, the Netherlands, Poland, Portugal and Slovakia, have voiced opposition.

The largest parties in the parliament have all committed to follow the process next year. Michel Barnier, the EU chief Brexit negotiator, is the favourite to get the nod from the centre-right European People’s Party, which is likely to win most seats .

But many MEPs are deeply sceptical that the Spitzenkandidat system will do anything for democratic accountability.

It is far from clear that voters care. Turnout in European elections has fallen consistently since 1979, and did not increase with the introduction of the Spitzenkandidat process in 2014, when only 42 per cent bothered to vote.

Some warn that it could even facilitate the potentially preposterous election to the head of the commission of an anti-EU populist completely at variance with the vast majority of elected heads of government.

Carthy refuses to get excited about the issue. “What we need is real reform of the EU rather than arguments about who gets the top job. What we need is a real engagement with citizens.”

The Spitzenkandidat system will only end up producing “another Europhile insider”, he says.

Hayes, on the other hand, is reluctant to give up on an “incremental” advance that gives “bit by bit”some kind of democratic legitimacy.

A bit like the old trade union slogan, “What we have we hold.”