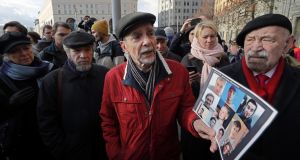 Russian human rights activist Lev Ponomaryov (centre) taking part in the “For Our and Your Children” rally in Moscow on October 28th. Photograph: Yuri Kochetkov/EPA

A Moscow court found Lev Ponomaryov, the head of the For Human Rights organisation, guilty on Wednesday of urging people in a Facebook post to join an unauthorised rally to protest against the arrest of opposition activists from two youth groups.

Mr Ponomaryov had sought permission from the Moscow city authorities for the “For Us and Our Children” demonstration outside the Moscow headquarters of the Federal Security Service, the successor agency to the KGB, on October 28th, but was refused.

The Council of Europe’s Commissioner for Human Rights, Dunja Mijatovic, urged Russia to release Mr Ponomaryov as a matter of urgency on Thursday.

“Punishing someone for sharing information in social media about a public event intended to be of a peaceful nature can hardly be justifiable,” she wrote on Facebook.

The case against Mr Ponomaryov showed that the authorities would stop at nothing to crush freedoms in Russia, Amnesty International said in a statement. “After speaking out against the injustices suffered by others at the hands of Russia’s so-called justice system, Lev Ponomaryov is now its latest victim.”

For Human Rights lodged an appeal against Mr Ponomaryov’s detention on Thursday and said it suspected the authorities were trying to derail the activist’s plans to help stage a demonstration in Moscow later this month. Moscow has not yet given permission for the “For Peace Against Violence” rally on December 16th.

A prominent figure in Russian human rights, Mr Ponomaryov has campaigned against the arrest of activists from the Network and New Greatness youth groups who are being investigated for violating anti-terrorism and anti-extremism laws.

Russian investigators have accused 11 members of Network of creating a terrorist group to destabilise the country during the presidential election in March 2018 and the Fifa World Cup in June. Several of the suspects say interrogators tortured them with electric shocks to extract confessions.

New Greatness activists admitted when they were arrested in March that their online political chat group was transformed into an anti-government movement at the suggestion of one of their members. Later it was revealed that an FSB officer had infiltrated the group and persuaded members to take an active role in opposition politics and learn how to use firearms.

Mikhail Fedotov, the head of the Kremlin’s Council for Human Rights, said Mr Ponomaryov was in good health after visiting the activist on Thursday, but raised questions about holding a person as old as 77 years in detention. “One of the police officers told me he was shocked when they brought in a person of such an advanced age,” he added.