Samira Imin’s father was incarcerated for three years in Xinjiang 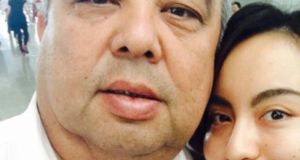 Iminjan Seydin and Samira Imin: he told his family he had never been imprisoned.

After orchestrating an international campaign to try to get her father out of prison in China’s Xinjiang province, Samira Imin finally saw the mild-mannered academic and publisher on a video clip last month – the first time she had caught a glimpse of him or heard his voice in three years.

Looking gaunt and with his head shaved, Iminjan Seydin appeared on a video produced and circulated by the Chinese state-run newspaper the China Daily where he chastised his daughter for speaking out against the Chinese Communist Party.

“Recently anti-China foreign forces have deceived my daughter into claiming I was under illegal detention,” he said in the clip that the state media organ released on Twitter. “In fact, this is not true. This is deception and nonsense. I am living well, healthy and free.”

In the video he told his daughter he was “heartbroken” to hear she had criticised the Chinese authorities and for saying he had been persecuted and imprisoned.

“How could my daughter say something like this? I want to tell you. Don’t be deceived by foreign anti-China overseas forces again and don’t say those things.”

Two years after her father disappeared, Imin got access to court documents showing he had been sentenced to 15 years in jail for “inciting radical ideologies”, a crime that was purportedly linked to his publishing of an academic title on Arabic rhetoric.

In the video, however, her father was behaving as if he had never been convicted. “If not for the Communist Party of China and the government we would not be leading a happy life like now,” he continued in the two-minute video message.

Seeing her father in the video clip on Twitter, Imin’s predominant feeling was one of relief

“I was in shock. But most importantly it proved he was alive. And then seeing him in such a propaganda video was very surprising. But overall, I was so just happy and relieved he was still alive,” she told The Irish Times.

Around the time the clip was released her father returned to his hometown. He explained to his family he had not called them for three years because he had wanted to “focus on his work” in rural Xinjiang, and he denied that he had been in prison.

Imin, who lives in Boston in the US, was able to video call him soon afterwards. She noted he had lost a lot of weight and his XXL shirt was now far too big for him. His thick, shiny hair – something he had always been proud of – had been completely shaved off.

She suspects her father is now being closely monitored, and on that first call he seemed strange and was effusive in his praise for China and the Communist Party.

The reality of the situation, she believes, is that he was in prison and his terms of early release mean he cannot discuss his detention or say anything critical of the government. His three missing years are now simply not mentioned.

A study by rights groups in 2018 found at least 45 cases of apparently forced televised confessions and statements over the previous five-year period, with reports saying they were used as propaganda tools to discredit allegations of abuse and to warn others who might criticise China.

Her father now wants Imin to return to China immediately, but she is not tempted. “If I went back to China I would be afraid of getting persecuted,” she says. “That would be the fear of every Uighur living overseas.”

The authorities confiscated her father’s passport in 2016 “in a period of passport investigating and collecting”, so he cannot leave the country. Imin’s other family members, friends and relatives also had their passports confiscated.

“If he is really leading this peaceful and free life then my father and the rest of my family should have their passports on hand,” Imin said. “I would call for the Uighur population to be able to share the same equal human rights that Chinese citizens have, including freedom of movement.”

She also called on the Chinese government to allow other Xinjiang families reunite. “From a humanitarian perspective, all I want is very simple: for these innocent people to lead a peaceful life. Let the families reunite with their loved ones. Life is short, leave them alone.”