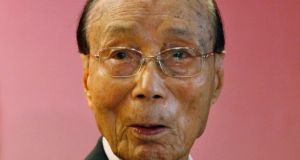 Run Run Shaw was one of the true giants of Hong Kong cinema, bringing Chinese movies to the West and transforming Hong Kong’s film business from a handful of small studios making kung-fu flicks into a multibillion dollar entertainment industry, in a career that spanned nine decades.

Born in Ningbo, south of Shanghai, in the dying days of the Qing dynasty, he was the youngest of six sons of textile merchant Shaw Yuh Hsuen.

Raised in China, Mr Shaw was educated at American schools and became passionate about cinema. In 1925, he and his elder brothers Runje, Runde and Runme set up Tianyi Film Productions in Shanghai with a film called

The Shaw brothers moved into Hong Kong – making and distributing films to a chain of about 100 cinemas across other Asian markets such as Singapore, Malaysia and Thailand.

In 1958, Shaw Brothers was founded with Run Run Shaw as president after he split away from his brothers.

In 1967 he set up Hong Kong’s biggest free-to-air television operator, TVB, and served as its executive chairman until 2011, helping to shape the city’s media culture. By the late 1960s he was the biggest media tycoon in Asia.

Mr Shaw is given much credit for popularising kung-fu as a genre, backing classics such as The One-armed Swordsman, which became popular outside Hong Kong and Asia. Mr Shaw was also an early proponent of “wu xia” fighting movies, and his influence can be seen in the films of Ang Lee and Quentin Tarantino.

During the 1970s, Shaw Studios was producing 40 movies a year, and nearly a quarter of a million people every day went to see them at Shaw cinemas right across Asia.

However, despite his success in boosting Asian cinema, he famously turned down the kung-fu genre’s defining star, Bruce Lee, in the 1960s.

Mr Shaw was a well-known philanthropist, having donated millions to charity through his Shaw Foundation, and all over Asia there are hospitals and schools bearing his name.

In December, the British Academy of Film and Television Arts (Bafta) presented a Special Award to Shaw in recognition of his outstanding contribution to cinema.

Mr Shaw died peacefully at his home in Hong Kong, surrounded by his family, TVB said in a statement.