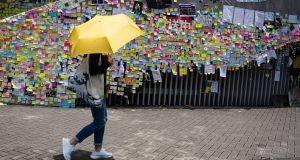 As protests and acts of dissent show no sign of abating in Hong Kong, Lennon and Lenin are now locked in a posthumous ideological battle in districts around the embattled city.

During the 2014 pro-democracy Umbrella Movement, Hong Kong activists took inspiration from the Lennon Wall in Prague and established their own makeshift notice board outside the legislature and adorned it with colourful Post-it Notes and posters carrying pro-democracy messages.

Protesters set up a similar Lennon Wall this summer to carry messages supporting the anti-extradition Bill movement, but that original wall was pulled down by pro-police demonstrators at the end of June.

A video clip of them defacing the iconic wall went viral and within days scores of replicas sprouted up across the city in response – in subways, bus stations, footbridges, underground passageways and on walls and shop windows in district after district. Some street performers even offered up their own bodies as mobile, slogan-carrying Lennon Walls.

Over the past several days the walls have become violent flashpoints, however, as pro-police, pro-Beijing supporters have ripped the post-its and posters down from some walls, and students have intervened to try to stop them. But the walls have become a potent symbol of resilient protest and anytime one is destroyed several others pop up to replace it.

The concept was adopted from the John Lennon Wall in Prague, which began with an unknown artist painting an image of the singer-songwriter and some of his lyrics following his assassination in 1980, and later became a rallying point for students who covered it with anti-communist and pro-democracy slogans.

“Some of these pro-Beijing guys would much prefer if we paid respect to the Soviet Lenin, rather than the British Lennon, but we don’t care,” said student Karen Leung (20) who was volunteering at one wall. “A few angry old people try to pull them down, but we tell them that for every one wall that comes down, 10 will pop up.”

The thoughts of Vladimir Lenin are enshrined in China’s constitution and Beijing’s evolving political approach is sometimes referred to as a Leninist capitalist state, a hybrid affair where a state-led freewheeling capitalist system operates under the ever-watchful eye of Leninist, authoritarian overlords.

While Hong Kong is a “special administrative region” that is currently enjoying 50 years of comparative freedoms under the “one country, two systems” framework, all key decisions are guided by the Chinese Communist Party leaders in Beijing.

The walls carry messages condemning the extradition Bill and the local government, and call for democratic reforms, while many messages target the police and accuse them of using excessive force at recent rallies. Over the past few days there have been several stand-offs and scuffles as groups have tried to destroy walls guarded by students.

More than 30 police in full riot gear were deployed to one wall in the Tai Po district on Wednesday to gather and remove evidence reportedly showing the names and IDs of police officers who were accused of brutality and concealing their identities at a recent clash with protesters.

At one train station an elderly man who refused to give his name hurled expletives at three youngsters who were building a wall. “You should support the police, not oppose them,” he shouted.

One of the students said that mostly they got messages of support from the community, but some of the older generation were opposed to them.

The student, who asked to remain anonymous, also claimed that sometimes triad members or off-duty police would come and start pulling the signs down.

“That’s when it can get dangerous. But, if we have to, we just move and set up the wall somewhere else. We can flow, we can crash, we are like water,” he said, evoking martial arts hero Bruce Lee’s mantra, which the protesters have adopted to define their fluid and decentralised strategic approach.

The city’s beleaguered chief executive, Carrie Lam, suspended the extradition Bill – which opponents said would have enabled China to pick up suspects in Hong Kong and remove them to the mainland for trial – in the face of massive protests.

Ms Lam refused, however, to withdraw the Bill formally or consider other student demands such as an independent investigation into alleged police brutality and the exoneration of any protesters prosecuted during the rallies. The protesters have widened their demands and are calling for meaningful elections, saying the current system where Beijing pre-selects the city’s leader and stacks the legislature with its own supporters is “the root of all the evils”.

Activists have announced plans for several more marches in the coming days, and are preparing a “stress test” on the Bank of China as they encourage supporters to withdraw any savings from the bank on Saturday.

1 Coronavirus: Government to extend restrictions for at least two weeks
2 Chief medical officer urges people not to visit hardware stores
3 Coronavirus: Ireland will have to ‘live alongside the virus’
4 Impact of coronavirus ‘overwhelming’ in Republic but for public-health controls
5 Coronavirus: More ‘striking’ evidence BCG vaccine might protect against Covid-19
Real news has value SUBSCRIBE