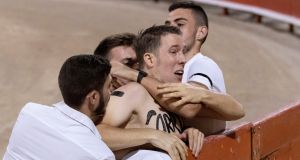 A protester with “No More Bullfights” on his chest at Coliseo Balear bullring in Palma de Mallorca, Balearic Islands. Photograph: Cati Cladera/EPA

Hundreds of animal rights activists protested outside the bullring in Palma de Mallorca at the weekend as bullfighting returned to the island for the first time since it was outlawed in 2017.

About 400 protesters chanted “It’s not art, it’s torture” and “No to bullfighting”, while inside the ring 12,000 people waited to watch some of Spain’s top toreros (bullfighters) enter the ring.

Bullfight supporters chanted “Freedom” while the arena’s loudspeaker system drowned out the protesters, first with the song Viva Espana, and then a rendition of the banned fascist anthem Cara al Sol (Facing the Sun).

The Balearic Islands regional government outlawed bullfighting in the islands in 2017 and promoted instead a form of the activity in which the animal was not harmed.

Causing physical or psychological damage to the bull carried fines of up to €100,000.

In 2018, the supreme court overruled the decision, retaining only the prohibition of alcohol at bullfights and restricting entrance to over-18s. The court ruled the regional court had exceeded its authority in outlawing a part of the nation’s cultural heritage.

Bullfighting is viewed by supporters as a fundamental part of Spanish culture and major bullfights are reported not as a sport but on the cultural pages of newspapers.

Bullfighting has been banned in other regions, notably the Canary Islands, where it has been illegal since the 1990s, and in Catalonia, which outlawed it in 2010. However, the Catalan tradition of bull running, in which a bull is pursued with flaming material attached to its horns, is still permitted on the grounds that it isn’t cruel.

Jorge Campos, the leader of the far-right Vox party in the islands, arrived at the Mallorca bullring draped in a Spanish flag, saying he had come to show his support for bullfighting.

According to government statistics the number of bullfights fell from 3,651 in 2007 to 1,521 in 2018, although there was a small rise in Castilla-La Mancha, Valencia, La Rioja and Navarra. – Guardian News and Media

1 ‘I thought it was a hoax’: Patient dies after Texas Covid party
2 Quarantine process to be tightened as health officials grow nervous
3 Maureen Dowd: Biden has his limitations but he’s no Trump
4 White House turns its fire on Anthony Fauci over Covid-19 comments
5 Dirty money: How the Mafia plundered Italy’s public health system
Real news has value SUBSCRIBE