For Epstein’s accusers, suicide marks another setback in quest for justice

‘We’ve worked so hard to get here, and he stole that from us, too’ says accuser 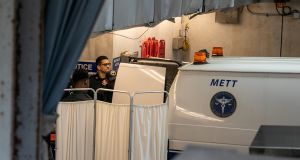 Virginia Giuffre’s husband woke her early in Australia, where it was Sunday morning, to share a stunning development that would leave her in tears: Jeffrey Epstein was dead. Giuffre, who has long accused Epstein of sexually abusing her, said the news of his suicide triggered a complicated mix of emotions. She was grateful that Epstein would never harm anyone again, but she said she was mostly angry that after so many years of struggle to bring attention to Epstein, there would be no chance to see him answer for his conduct.

“We’ve worked so hard to get here, and he stole that from us, too,” Giuffre said in an interview with the New York Times. Epstein’s suicide in a Manhattan federal jail on Saturday left accusers around the globe shocked and angered that they would never see him face a full reckoning for his exploits. After years of setbacks, they said they had come so close, with Epstein behind bars and a reinvigorated prosecution eager to air allegations of sexual abuse that had long been obscured.

“Jeffrey Epstein took himself out because he was too much of a coward to face justice and his accusers,” said Alicia Arden, a model who filed a police report against Epstein in 1997 that accused him of sexually assaulting her after purporting to be a talent scout for Victoria’s Secret.

Jennifer Araoz, who said she had been raped by Epstein after being recruited outside her Manhattan high school in 2001, said she was angry he would not have to face anyone in court. “We have to live with the scars of his actions for the rest of our lives, while he will never face the consequences of the crimes he committed, the pain and trauma he caused so many people,” Araoz said in a statement. Several accusers, some speaking through lawyers, said they hoped authorities would continue their investigation, focusing on other people in Epstein’s circle who they said had helped recruit, train and coerce his victims. Federal prosecutors have indicated they are looking beyond Epstein. Federal charges filed against him last month included a charge of conspiracy.

“Jeffrey Epstein did not act, and could not have done what he did, alone,” said David Boies, a New York attorney representing Giuffre and other accusers. “Justice demands that those who acted with him also be held accountable.” In the hours after Epstein (66) was found lifeless in his cell, Geoffrey Berman, the US attorney in Manhattan, said his office would continue to investigate. “To those brave young women who have already come forward and to the many others who have yet to do so, let me reiterate that we remain committed to standing for you,” Berman said in a statement.

Epstein’s suicide came a day after a federal appeals court released a cache of previously sealed documents, including depositions that revealed disturbing details about Epstein’s conduct. Giuffre said in depositions contained in the documents that she had been kept as a “sex slave” with the assistance of Ghislaine Maxwell, Epstein’s longtime confidante.

Maxwell, in another deposition in the case, called Giuffre’s accusations “an absolute lie”. Her lawyers could not be reached for comment on Saturday. A day earlier, their office had said they were out of the country and unavailable to comment. Giuffre said in the interview that she’d like to see people continue pushing the justice department to hold Epstein’s allies accountable. The new documents and details emerging in the case have raised extensive questions about the scope of Epstein’s network – which appears to have spanned from New York to New Mexico to the Caribbean – as well as the number of victimised girls and the help he received from loyal companions.

Michelle Licata, who has accused Epstein of assaulting her when she was 16, said in text messages that she wasn’t so much angry as she was disappointed in not having a chance to confront him. She said she never wanted him to die. “I just wanted him to be held accountable for his actions,” Licata said. Robbie Kaplan, an attorney representing an accuser who was a minor at the time of the conduct and was included in the federal indictment, said she “will continue to fight tirelessly on their behalf not only to seek justice but also to ensure that all of the facts of his monstrous crimes become known to the world”.

Sigrid McCawley, another attorney working with Giuffre and other women, said: “The victims await the true justice they have sought and deserve.” A range of accusers had previously worked with Florida investigators who had been building a case against Epstein more than a decade ago amid allegations that girls were recruited to give Epstein massages that led to assaults. He avoided federal charges from that case thanks to a plea agreement in 2008 that allowed him to admit to state charges of solicitation of prostitution from a minor. He served 13 months in jail but was allowed to leave the jail for 12 hours a day, six days a week, to work at his office in Florida.

Epstein’s case resurged in recent months after a Miami Herald investigation last year further examined that plea agreement. Epstein was arrested last month at Teterboro Airport in New Jersey and charged by Manhattan federal prosecutors with sex trafficking of girls as young as 14, renewing hope among his accusers that he would face overdue accountability.

Jack Scarola, a Florida attorney who represents additional women, said the victims he knows regretted that they might not get answers and that the chance to hold Epstein responsible may have died with him. “My primary reaction is that Jeffrey Epstein’s victims have been once again failed by the justice system and cheated out of an opportunity for justice,” he said. Scarola said he was stunned that Epstein had not been on suicide watch, given both his high profile and that prison officials suspected he had attempted to kill himself last month. Epstein had been placed on suicide watch after he was found injured in his cell on July 23rd, but he was taken off six days later, according to an official familiar with his detention.

Authorities did not immediately explain why he was taken off suicide watch. The FBI said it was investigating, and attorney general William Barr said in a statement that a special inquiry would be opened into what had happened. “I was appalled to learn that Jeffrey Epstein was found dead early this morning from an apparent suicide while in federal custody,” Barr said. Spencer Kuvin, another attorney, said one of his clients was feeling some sense of closure that the person who had wronged her was gone forever. But she was also frustrated that he would not answer for his crimes in court, Kuvin said. “I think that she’s in shock,” Kuvin said. - (New York Times)