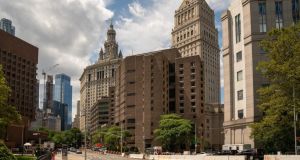 US president Donald Trump has retweeted an unfounded conspiracy theory suggesting a link between Bill and Hillary Clinton and disgraced billionaire Jeffrey Epstein, who died in prison over the weekend.

Epstein, a well-known financier who was convicted of sex-trafficking underage girls, was found dead in his prison cell on Saturday.

Officials said he had died by “apparent suicide,” prompting widespread recriminations over why he had not been placed on suicide watch following an apparent attempt on his own life earlier this month.

Mr Trump, who is staying in his golf club at Bedminster, New Jersey, for a 10-day holiday, retweeted a tweet from conservative comedian Terrence Williams which claimed to link the Clintons to Epstein’s death.

The financier “had information on Bill Clinton and now he’s dead”, Mr Williams wrote, while also posting a video which included a clip of him noting that “for some odd reason, people who have information on the Clintons end up dead”.

A spokesman for Mr Clinton branded the accusations “ridiculous” and “of course not true, and Donald Trump knows it”.

Several alleged victims of Epstein expressed dismay that the financier would not face criminal trial over accusations that he had lured underage girls to engage in sexual activity with him and other men.

It has also renewed interest in the initial case concerning Epstein more than a decade ago when he avoided a federal prosecution and was given a 13-month sentence which allowed him to spend most of each day outside prison.

Last month, Mr Trump’s labour secretary Alexander Acosta was forced to resign over his involvement in the original case, which occurred in Florida when he was a state attorney.

Epstein was found at about 6.30am on Saturday morning at the Metropolitan Correctional Center in lower Manhattan, a highly secure facility which has housed high-profile offenders including fraudster Bernie Madoff and, more recently, Mexican drug lord Joaquin “El Chapo” Guzman.

Jennifer Araoz, who alleges that Epstein raped her after meeting her outside her high school in New York in 2001, said: “We have to live with the scars of his actions for the rest of our lives, while he will never face the consequences of the crimes he committed, the pain and trauma he caused so many people.”

News of Epstein’s death emerged a day after new documents were unsealed related to the case taken by Victoria Giuffre. The documents allege that she was trafficked to senior political figures, including former US senator George Mitchell, who helped broker the Belfast Agreement.

Mr Mitchell strenuously denied the allegations, stating that he did know Epstein but had never met Ms Giuffre.

“The allegation contained in the released documents is false,” he said. “I have never met, spoken with or had any contact with Ms Giuffre.”

Britain’s Prince Andrew was also named in the court documents.