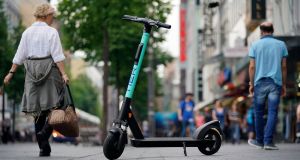 After complaints in Paris about the threat to pedestrians from e-scooters being ridden or abandoned on the pavements, city hall has introduced 20km/h (12mph) speed limits and fines of €135 (£125) for riding them on the pavement. Photograph: Ronald Wittek/EPA

A 30-year-old man has been killed after being hit by a motorbike while riding his e-scooter on a French motorway.

It is the third death linked to the increasingly popular mode of transport in the Paris region in four months, and has sparked further safety concerns and renewed calls for their regulation.

The incident happened around midnight on Friday on the A86 at Vélizy-Villacoublay, 4km from Versailles to the southwest of central Paris.

The scooter rider was not wearing a helmet and was reportedly travelling in the fast lane when the motorbike hit him from behind. Initial police reports said it was not clear if the scooter had lights.

The motorcyclist suffered multiple injuries and is in a serious condition in hospital. Police found his bike 400m from the point of the collision.

Using e-scooters on motorways is banned in France.

The day before the collision, a 27-year-old woman suffered serious head injuries after falling from an e-scooter she was using in a cycle lane in Lyon. A few days earlier a 41-year-old man had been seriously injured after falling from his e-scooter in Lille. Police have appealed for witnesses to both incidents.

The first e-scooters appeared in Santa Monica, California, two years ago and have proven hugely popular in cities across Europe. Fans have embraced them as a quick and economical means of city travel, but local authorities have struggled to respond to increasing safety concerns.

After complaints in Paris, where there are about 20,000 e-scooters, about the threat to pedestrians from those being ridden or abandoned on the pavements, city hall has introduced 20km/h (12mph) speed limits and fines of €135 (£125) for riding them on the pavement.

In Bruges, Belgium, the mayor has ruled out introducing e-scooters, saying they were “not right” for the city’s medieval streets.

A 25-year-old man was killed after being hit by a lorry in a northern district of Paris in June, the first fatal incident involving an e-scooter in the French capital. An 81-year-old man died after he was reportedly knocked over by an e-scooter in Levallois-Perret, a Parisian suburb, in April.

In the UK, the TV presenter and YouTube star Emily Hartridge was killed when her e-scooter collided with a lorry at a roundabout in Battersea, southwest London, in July.

Germany authorised e-scooters on streets and cycle paths in May, but banned them from pavements.

A 27-year-old man on an e-scooter died after being hit by a car in Helsingborg, Sweden, in May. – (Guardian)