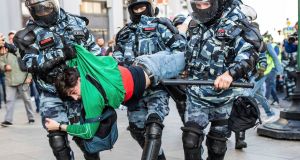 Police seize a man during a protest in Moscow against the exclusion of some city council candidates from an upcoming election. Photograph: Evgeny Feldman, Meduza via AP

While tens of thousands of Russians were flocking to an opposition rally in Moscow on Saturday, Vladimir Putin was far away in Crimea visiting a motorcycle festival organised by the pro-Kremlin Night Wolves biker club.

Putin appeared at the event astride a Russian-made Urals motorbike with Sergey Aksyonov – prime minister of Crimea since Russia annexed the Ukraine’s Black Sea peninsular in 2014 – riding in the sidecar.

Heading the procession was Night Wolves chief Alexander Zaldostanov – otherwise known as “The Surgeon”, an outspoken nationalist who has pledged to help protect Russia from any Maidan-style political uprising.

Speaking to a crowd of biker fans, Putin congratulated the Night Wolves for staging the festival in Crimea for the 10th time. “I am very pleased that these courageous and cool guys serve as role models for youngsters in our country showing them the right attitude towards Russia,” he said.

The Kremlin has not yet commented publicly on the political unrest in Moscow where opposition candidates excluded from an upcoming city assembly election have been staging protests for four weeks in a row. Most observers agree that Putin must have approved tough police action at two recent unauthorised rallies where a total of more than 2,300 people were arrested.

Russian opposition activists led a huge rally on Moscow’s Sakharov Prospect on Saturday that, although peaceful, was cast as an act of defiance against the country’s increasingly repressive law enforcement agencies.

White Counter, an independent group that monitors turnout at demonstrations, said at least 50,000 people joined the event, making it the biggest political protest in the Russian capital in almost eight years. Police estimated there were 20,000 participants.

Moscow’s mayor, Sergei Sobyanin, had given permission for the demonstration and police remained in the background as protesters stood in the rain waving banners demanding free elections and chanting provocative political slogans “Out with Sobyanin” and “Down with the Tsar”.

After the officially allocated two hours for the meeting were up, a group of mainly young folk headed for the city centre to protest outside the office of the president’s administration. Riot police wielding truncheons immediately set upon the crowd, dragging off people to waiting vans. More than 350 people were arrested, according to OVD-Info, a rights group that monitors political detentions.

In other action during the day, police arrested Lyubov Sobol, an opposition activist who is staging a hunger strike to protest her exclusion from the Moscow city parliament election, and raided a TV studio used by Russian anti-corruption crusader Alexei Navalny’s “Navalny Live” political show.

“It’s mayhem, but they can’t jail everyone,” Alexander Solovyev, the chairman of the Open Russia rights group, told the rally in Sakharov Prospect. “It’s going to be very difficult but we will succeed.”

Prominent Russian artists and media personalities had urged Muscovites to turn out, boosting the profile of the event.

Young protesters climbed on to the roofs of a line of mobile toilets to sing and dance as fashionable rap artists Face and IC3SPEAK , performed.

Some youngsters were demonstrating for the first time in their lives. “Why is there no dialogue here?” asked a 19-year-old law student who declined to give his name. “You’d think Sobyanin would at least make a speech.”

“It’s because the opposition is too soft,” explained his class mate. “Our authorities are bandits. It’s necessary to speak their language and match strength with strength.”