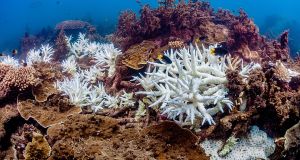 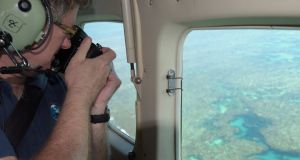 Prof Terry Hughes during an aerial survey of corals in 2017

The Great Barrier Reef has experienced another mass bleaching event caused by the stress of elevated sea temperatures arising from escalating greenhouse gas emissions, according to scientists based in Australia.

An aerial survey by marine biologists at ARC Centre of Excellence for Coral Reef Studies, attached to James Cook University in Queensland, has confirmed the bleaching is more extensive than ever.

The survey completed during March was led by Irish scientist Prof Terry Hughes, who has outlined the extent of the damage.

When corals are stressed by changes in temperature, light or nutrients, they expel algae normally living within their tissues, which are essential if they are to thrive, causing them to turn completely white.

“The Australian summer of 2019-2020 will be remembered as the year when anthropogenic climate change struck hard – drought, deadly bushfires, and now another bout of coral bleaching on the Great Barrier Reef; the third in just five years. The 2020 bleaching is severe, and more widespread than any of the preceding events,” Prof Hughes told The Irish Times.

Large-scale coral bleaching is caused by thermal stress due to spikes in sea temperatures during unusually hot summers, he added. The first recorded mass bleaching event along Great Barrier Reef occurred in 1998, then the hottest year on record.

This year, February had the highest monthly sea surface temperatures ever recorded on the Great Barrier Reef since the Australian Bureau of Meteorology’s records began in 1900.

The team surveyed 1,036 reefs from the air to measure the extent and severity of coral bleaching throughout the Barrier Reef region. About the size of Japan, it is the world’s largest single structure made by living organisms. Besides being a major tourism attraction, it is an ecosystem of global importance.

Two observers, from the ARC Centre of Excellence for Coral Reef studies and the Great Barrier Reef Marine Park Authority, scored each reef visually, repeating the same procedures developed during previous bleaching events. The accuracy of the aerial scores is verified by underwater surveys.

“Until global emissions of greenhouse gasses are quickly reduced to net zero, and sea temperatures stabilise, the Great Barrier Reef will continue to lose corals from heat stress. This, the fifth mass coral bleaching event in 23 years, confirms that we are running out of time for radical action on emissions,” Prof Hughes said.

Bleaching is not necessarily fatal and affects some species more than others However, when bleaching is severe, many corals die. In 2016, half of the shallow-water corals died on the northern region of the Great Barrier Reef between March and November. “Later this year, we will assess underwater the losses of corals during this most recent event,” added Prof Hughes who is a global authority on coral bleaching.

Already, it was clear that coastal reefs were badly bleached this year at almost all locations, stretching from the Torres Strait in the north to the southern boundary of the Great Barrier Reef Marine Park.

“For the first time, severe bleaching has struck all three regions of the Great Barrier Reef – the northern, central and now large parts of the southern sectors.”

The north was the worst affected region in 2016, followed by the centre in 2017. In 2020, the cumulative footprint of bleaching has expanded further, to include the south. The distinctive footprint of each bleaching event closely matches the location of hotter and cooler conditions in different years.

“As summers grow hotter and hotter, we no longer need an El Niño event [seasonal warm sea current movements in the southern hemisphere] to trigger mass bleaching at the scale of the Great Barrier Reef,” he said.

Of the five events so far, only 1998 and 2016 occurred during El Niño conditions. “We have already seen the first example of back-to-back bleaching, in the consecutive summers of 2016 and 2017. The gap between recurrent bleaching events is shrinking, hindering a full recovery.”

3:24 Larger retail stores to reopen on Monday ahead of schedule