Earthquake: How Nepal is coping with a new reality

There are candlelit vigils and vans holding up buildings, writes Clifford Coonan in Nepal 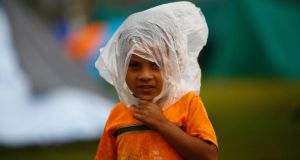 Sheltering from the heavy rain that struck Kathmandu on Tuesday as people scrabbled through the rubble looking for relatives and friends. Photograph: Narendra Shrestha/EPA

For a stretch as you drive the streets of Kathmandu at dusk, you could almost forget there has been a devastating earthquake that has claimed about 4,600 lives so far, the scene a familiar one from the urban developing world.

It’s only a brief impression, as you pass a candlelit vigil on the roadside, and then a whole corner of a street is gone, with piles of bricks standing where a shop, office or home used to be.

A white flat-bed van appears to hold up the entire smashed edifice of a pale three-storey building. It’s in the missing cross-section of an arch outside a temple. Or the way the lights suddenly go out and flicker back on again, or the manner in which people check they are standing safely on firm ground.

Prime minister Sushil Koirala has warned that the death toll could rise to more than 10,000, and Kathmandu, even as night falls and the streets empty, looks ill-prepared for the devastation wrought by Saturday’s 7.9 magnitude quake.

“It’s been very hard. Some, many people are leaving because they think the earthquake was just the beginning, that the big one is yet to come,” said one hotel worker. 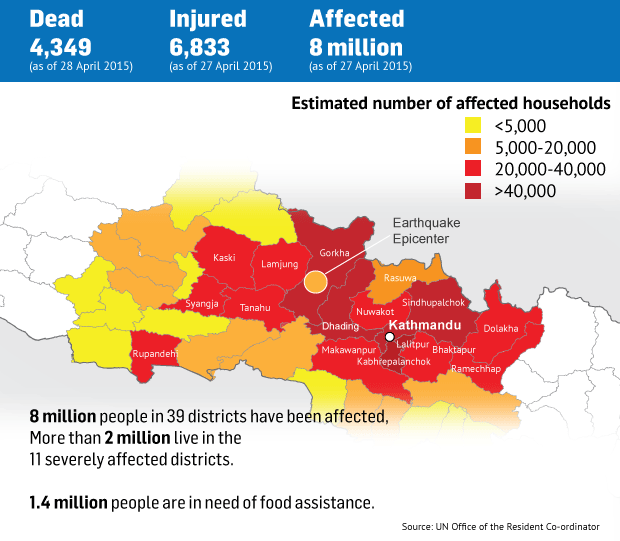 At one point a clearly antique low building, with small windows and an ornate door, has survived the tremor, while across from it, the giant concrete beams of a new construction have collapsed on top of each other.

Kathmandu is a small city, with just 700,000 people, and many of the Himalayan city’s landmarks are simply gone: the 19th-century Dharahara tower tumbled as the quake struck on Saturday, taking many of the sightseers inside with it. Around Durbar Square, in the heart of the city, as unsettling drone footage has shown a horrified world, there is deep damage.

While Kathmandu people know the situation is bad in the capital, there are fears that the it is even worse in the outlying regions.