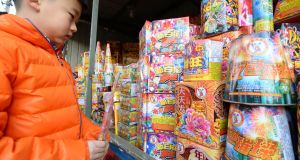 The Beijing city government has told officials to lead by example and not set off fireworks or firecrackers to welcome the Lunar New Year on Friday to help prevent smog.

The Chinese New Year holiday, which begins on New Year’s Eve on Friday, is normally marked by riotous displays of fireworks and countless firecrackers, which are thought to bring good luck and scare off evil spirits.

The fireworks blacken the skies with smoke for hours.

But in recent years with public concerns about air pollution mounting, the government has tried to limit the use of pyrotechnics.

In a statement late on Thursday, the Beijing city government said officials must “take the lead” in not setting off fireworks or firecrackers.

“Have firm environmental protection consciousness and a sense of responsibility,” it said.

“Proactively guide family members and friends not to let off or to limit the letting off of fireworks and firecrackers, improve air quality together and get into the action of ensuring blue skies for the capital.”

The government has already limited firework sales in Beijing, with 511 fireworks stalls approved this year compared with 719 last year, none of them in central Beijing, the official China Daily said.

Other parts of the country are also cracking down.

Central Henan province has banned their use in all cities and towns and Hebei’s Baoding city is threatening to detain anyone who sets off fireworks outside.

Efforts to clean up the skies in the northern industrial heartland, which includes Beijing, are being thwarted by coal-burning industry and indoor heating, which increases during China’s winter months, especially in the bitterly-cold north.

The Lunar New Year, which marks the start of the year of the rooster, sees the largest annual mass migration on earth, as hundreds of millions of workers pack trains, buses, aircraft and boats to spend the festival with their families. For many Chinese people, it is their only holiday of the year.

5 ‘A lucky escape’: Woman rescued from sinkhole in sea off west Cork