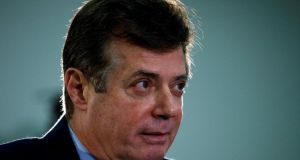 US President Donald Trump’s one-time campaign chair and convention manager Paul Manafort speaks at a press conference at the Republican Convention in Cleveland, US on July 19th, 2016 Photograph: Carlo Allegri/Reuters/File

US president Donald Trump’s former campaign manager Paul Manafort met with Wikileaks founder Julian Assange in the Ecuadorian embassy in London in March 2016 around the time he joined the Trump election campaign, the Guardian reported yesterday.

According to the report – which Mr Manafort dismissed as “totally false”, threatening legal action – the lobbyist met with Mr Assange in 2013, 2015 and in 2016. The alleged 2016 meeting in particular is likely to come under particular scrutiny by special counsel Robert Mueller who is investigating possible links between the Trump campaign team and Russia.

Months after the March 2016 meeting, Wikileaks published thousands of emails related to the Democratic National Committee that were allegedly stolen by Russia’s intelligence agency.

The explosive claims come a day after prosecutors for Robert Mueller’s office said that Mr Manafort had lied to investigators after he struck a plea deal two months ago. In court filings, prosecutors said that the former lobbyist’s “crimes and lies” about a variety of subject matters meant he had breached the plea agreement.

Mr Manafort pleaded guilty to two charges in September on the eve of jury selection for his trial in Washington. But the latest development indicates that any co-operation between Mr Manafort and the office of the Special Counsel has now collapsed. Prosecutors could potentially re-file some charges that they had agreed to drop.

Mr Trump lashed out at the Mueller investigation on Tuesday, labelling the former FBI director as “a conflicted prosecutor gone rogue.”

“The Fake News Media builds Bob Mueller up as a Saint, when in actuality he is the exact opposite,” he said on Twitter. “He is doing TREMENDOUS damage to our Criminal Justice System, where he is only looking at one side and not the other. Heroes will come of this, and it won’t be Mueller and his terrible gang of Angry Democrats.”

Speaking at a White House press briefing – the first in nearly a month – press secretary Sarah Huckabee Sanders said that Mr Trump declined to comment on the Manafort report.

“Certainly we remain confident in the White House’s assertion that the President was involved in no wrong doing, was not part of any collusion. The things that have to do with Mr Manafort I’d refer you to his attorneys to address that.

As for the Mueller investigation she said: “We know there was no collusion and we’re ready for this to wrap up.”

Ms Sanders was also asked if Mr Trump was considering a pardon for his former campaign manager. “I’m not aware of any conversations for anyone’s pardon involving this process,” she said.

Mr Trump’s lawyers last week responded to questions from Mr Mueller in writing relating to the investigation, including, reportedly, what he knew about any contacts between Mr Manafort and Russia.

Veteran journalist Bob Woodward also reported on Tuesday that Mr Mueller’s team was aware of the alleged meeting in March 2016 between Mr Manafort and Mr Assange in the Ecuadorian embassy.

However, Wikileaks dismissed the substance of the Guardian report in a tweet shortly after it was published.

“Remember this day when the Guardian permitted a serial fabricator to totally destroy the paper’s reputation,” the tweet read. “@WikiLeaks is willing to bet the Guardian a million dollars and its editor’s head that Manafort never met Assange.”

Mr Assange has been living in the Ecuadorian embassy in London since 2012 after he sought asylum to avoid extradition to Sweden to face sexual assault charges.

Paul Manafort was appointed as Mr Trump’s campaign manager in the spring of 2016 but was dismissed in August of that year.

A veteran public affairs lobbyist and Republican insider, the 69-year-old has been held in solitary confinement in a jail in Virginia since June after he allegedly engaged in witness-tampering.