More than 80 dead in Ethiopian protests following killing of singer

Haacaalu Hundeessa, a popular voice during protests, was shot dead on Monday 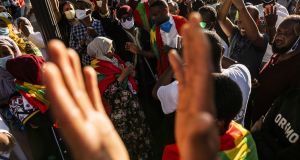 A crowd gathers outside the Governor’s Mansion to protest the death of musician and activist Hachalu Hundessa on Tuesday in St Paul, Minnesota. Photograph: Getty Images

More than 80 people have been killed in protests in Ethiopia’s Oromiya region during protests following the killing of a popular singer, a regional police commissioner told the state-run Ethiopian Broadcasting Corporation on Wednesday.

The number does not include any deaths in the capital Addis Ababa, where one policeman has been killed and an unspecified number of people were killed in three blasts on Tuesday. The singer was shot dead on Monday night.

Musician Haacaalu Hundeessa died on Monday in an attack by unidentified gunmen.

The singer and songwriter was a popular voice during protests by the Oromo, Ethiopia’s biggest ethnic group, for reforms in the ruling Ethiopian People’s Revolutionary Democratic Front that led to the appointment of prime minister Abiy Ahmed in 2018.

Abiy called for national unity, and said “no one is above the law,” in a statement read on the national broadcaster. The authorities shut down the internet in the country on Tuesday to curb the protests from spreading. – Agencies