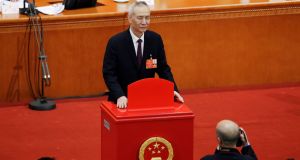 Liu He: has been appointed as vice-premier responsible for the economy at the seventh plenary session of the National People’s Congress in Beijing, China. Photograph: Jason Lee/Reuters

President Xi Jinping has named a phalanx of senior allies to a revamped cabinet including appointing his trusted adviser Liu He as vice-premier responsible for the economy, and the US-educated Yi Gang as central bank chief.

The cabinet appointments on the penultimate day of the largely ceremonial National People’s Congress show Mr Xi has now achieved dominance over policy-making and installed himself at the core of the ruling Communist Party.

On Saturday, Mr Xi was unanimously re-elected president of China, having earlier abolished the two-term limit on leadership in China, allowing himself to rule indefinitely.

Four vice-premiers were announced, including Hu Chunhua, party chief of the southern province of Guangdong, who visited Ireland last year at the head of a large delegation.

The most senior appointment was of Liu He, a long-standing friend of Mr Xi, who is rumoured to have been a close friend since they were teenagers during the wilderness years of the Cultural Revolution.

He will take the lead on overall economic policy, with help from premier Li Keqiang, while Wang Qishan, who was named vice-president at the parliament, is likely to act as a special envoy handling the Trump administration and trying to offset a possible trade war.

Mr Xi will also call upon the Harvard-educated Liu for advice on overall economic policy direction, with a focus on trimming debt as well as modernisation and reform of the financial sector.

After working in academia in China, he worked as a government official in various departments before moving to the US, where he did a Masters degree in public administration.

His CV includes senior positions in the top planning agency the National Development and Reform Commission (NDRC) and the State Information Centre.

Mr Yi has strong international links and his appointment as governor of the People’s Bank of China is evidence of commitment to redouble efforts to clean up the financial sector and bring monetary policy into line with global norms.

Mr Yi was deputy to the outgoing Zhou Xiaochuan for more than 10 years and his ascendancy is also a sign of continuity. The biggest challenge of his new role will be dealing with China’s debt problem. The country’s debt-to-output ratio is more than 300 per cent.

“The main task is that we should implement prudent monetary policy, push forward the reform and opening-up of the financial sector, and maintain the stability of the entire financial sector,” said Mr Yi at the Great Hall of the People in downtown Beijing after his appointment.

Mr Yi has a business degree from Hamline University in St Paul, Minnesota, before doing his PhD at University of Illinois and teaching as a professor at Indiana University. He is a fluent English speaker.

During his record 15-year term, Mr Zhou won kudos for his management of the PBoC during the global financial crisis and his success at bringing the country’s yuan currency to reserve-currency status.

At the foreign ministry, Wang Yi was elevated to the state council, while holding on to his current ministerial post, giving him the country’s two top diplomat roles.

He has been foreign minister since 2013 and was previously ambassador to Tokyo and speaks fluent Japanese. He has also led China’s Taiwan Affairs Office.

Other appointments include Wei Fenghe as defence minister. This is essentially a figurehead position as power in the military lies with the Central Military Commission, of which Mr Xi is head. Mr Wei was also named as a state councillor.

Lu Hao, a rising star in the Communist Party firmament, will take over a new ministry of natural resources.

The NPC ends with a news conference in the Great Hall of the People on Tuesday.