China cosies up to Russia as trade war escalates with US 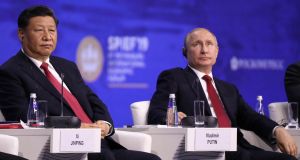 As China pivots towards Russia amid its escalating trade war with Washington, military tensions have been ratcheted up in the region on a number of fronts over the past week.

Among the multiple billion-dollar deals inked over the few days, Putin welcomed a Huawei 5G rollout in Russia and slammed “bully” Washington for blacklisting the Chinese telecoms giant.

“In some circles, this is even being called the first technological war of the dawning digital era,” he said, against the backdrop of a bitter trade war between the Trump administration and Beijing, and US sanctions against Russia imposed since Moscow’s 2014 annexation of Crimea.

Not long after the two leaders enjoyed a performance at the Bolshoi theatre, a Russian and an American warship nearly collided in the East China Sea. Both sides blamed the other for dangerous maneuvering, as Russia’s destroyer Admiral Vinogradov came within just 50m (160ft) of the cruiser USS Chancellorsville. The incident came just days after Washington accused Russian aircraft of intercepting a US aircraft flying in international airspace over the Mediterranean Sea three times in a few hours.

The US navy declassified videos and pictures of the near warship collision to dispute the Russian allegations that the US was at fault, saying the Russian wake in the photographs could only come from a steep turn that was executed at high speed. Acting US secretary of defence Patrick Shanahan called their actions “unsafe and unprofessional”.

A few days prior to the incident, Mr Shanahan released the Department of Defence’s 2019 Indo-Pacific Strategy Report, which refers to Russia as a “revitalised malign actor” and China as a country intent on establishing a “repressive world order”.

The report accuses Russia of seeking to “undermine US leadership and the rules-based international order” and said China “seeks Indo-Pacific regional hegemony in the near-term and, ultimately global preeminence in the long-term”.

“China’s coercive behaviour is playing out globally, from the Middle East and Africa to Latin America and Europe, ” the 55-page report said.

In a move that will incense Beijing, the defence department report explicitly referred to Taiwan as a country, even though Washington officially observes the “one-China policy” and does not give national recognition to Taiwan – a de facto independent island that China considers its province.

The report said the US would “ensure that Taiwan remains secure, confident, free from coercion, and able to peacefully and productively engage the mainland on its own terms”. It added they would “faithfully implement” the Taiwan Relations Act, which congress enacted in 1979 when Washington shifted diplomatic relations from Taipei to Beijing, and which obligates the US to help Taiwan defend itself if required.

On Thursday Reuters reported that the US was currently preparing to sell more than $2 billion worth of high-tech tanks and weaponry to Taiwan, a report that was soon confirmed by Taipei.

Beijing immediately condemned the move and said it ran counter to pledges made by Washington. “The US must fully understand the high sensitivity and serious harm of the issue of arms sales to Taiwan,” a spokesman said.

The following day, the Trump administration announced it would be selling 34 Scan Eagle drones to Malaysia, Indonesia, the Philippines and Vietnam for a total of $47 million to enhance their intelligence gathering capabilities over the hotly disputed South China Sea, a sea which China claims the vast majority of.

Moving northwards, the US Department of Defence’s Arctic Strategy report was also released towards the end of last week, and China and Russia came under fire on this front too.

Russia regulates maritime operations “contrary to international law” the report said, and has reportedly threatened to use force against vessels that fail to abide by Russian regulations. It could “utilise its military capabilities in an effort to deny access to disputed Arctic waters or resources”.

“China is attempting to gain a role in the Arctic in ways that may undermine international rules and norms,” Shanahan’s report said, “and there is a risk that its predatory economic behaviour globally may be repeated in the Arctic.”

Speaking to national security leaders in Singapore recently, Shanahan said his approach was not confrontational, it was about having a dialogue.

“But we’re not going to ignore Chinese behaviour, and I think in the past people have kind of tiptoed around that.”

In response to America’s initiatives, China’s general Wei Fenghe warned the People’s Liberation Army “has no intention to cause anybody trouble, but it is not afraid to face up to troubles. Should anybody risk crossing the bottom line, the PLA will resolutely take action and defeat all enemies”.

He said the army would not “yield a single inch of the country’s sacred land” and “if anyone dares to split Taiwan from China, the Chinese military has no choice but to fight at all costs, at all costs, for national unity”.