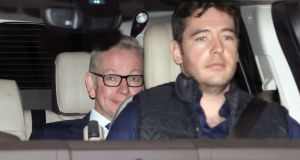 The Conservative leadership contest begins on Monday amid sharp disagreements over Brexit and controversy over environment secretary Michael Gove’s past drug use.

Nominations close at 5pm, with MPs voting in secret ballots over the next two week to choose two candidates to go before the entire party membership.

Boris Johnson extended his lead in terms of public endorsements from MPs on Sunday after he won the backing of leading hardline Brexiteers including former Brexit minister Steve Baker and former international development secretary Priti Patel. Mr Johnson has promised to withhold part of Britain’s £39 billion (€44bn) “divorce bill” until the European Union agrees to a better Brexit deal.

“I think our friends and partners need to understand that the money is going to be retained until such time as we have greater clarity about the way forward. I always thought it was extraordinary that we should agree to write that entire cheque before having a final deal,” he told the Sunday Times.

Mr Johnson said he would take Britain out of the EU by October 31st with or without a deal. And he promised to “shed the old intellectual prison of the backstop arrangements” and consign the issue of the Border “to the discussion on the future partnership which is where it logically belongs and where it should have been all along”.

The point that I made in the article is that if any of us lapse sometimes from standards that we uphold, that is human

Foreign secretary Jeremy Hunt warned an “ultra hardline” British prime minister would face a similarly hardline response from the EU. And he claimed German chancellor Angela Merkel told him last week that the EU “would look at any solutions” put forward by a new prime minister with the right approach.

“I’m absolutely clear that, if we take the right approach to this, the Europeans would be willing to negotiate on the package,” Mr Hunt told Sky News.

“She said of course with a new British prime minister we would look at any solutions. ‘It’s up to you’, she said. ‘Germany doesn’t have that border with the Republic of Ireland, you need to come up with a solution.’”

Mr Gove said he was fortunate to avoid prison for taking cocaine 20 years ago when he was a journalist, describing his use of the drug as “a profound mistake”. He rejected accusations of hypocrisy for writing a column in 1999 denouncing “middle-class professionals” who used drugs, around the time he was doing so himself.

“I think anyone can read the article and make their own minds up,” he said. “The point that I made in the article is that if any of us lapse sometimes from standards that we uphold, that is human. The thing to do is not necessarily then to say that the standards should be lowered. It should be to reflect on the lapse and to seek to do better in the future,” he told the BBC’s Andrew Marr Show.

Home secretary Sajid Javid said middle-class people who used drugs should consider the damage their behaviour caused to poor people along the supply chain from Colombia and to children exploited by British gangs.

“They are people who have their organic food, they boast about fair trade, they talk about climate change while at the same time, come Friday or Saturday night, they’re all taking class-A drugs. They should be thinking about the impact they’re having on children . . . the horrific abuse that I have seen as home secretary, children who are trafficked into this trade,” he told Sky News.