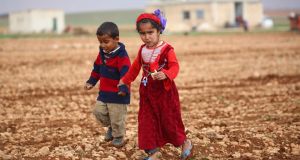 If left untreated, the daily trauma could have other consequences, disrupting the development of the brain during formative years. Photograph: Delil Soul/Getty

Six years of violence and bloodshed have spawned a mental health crisis among Syria’s children whose impact will be felt for decades, international charity Save the Children have said.

In a report it called the largest mental health survey inside Syria during the war, the group found children increasingly crippled by fear or anger.

Most of the children - two-thirds of whom had lost a loved one, had their houses bombed, or been injured - exhibited severe emotional distress and lacked psychological support, it said, “with parents themselves struggling to cope”.

The effects ranged from sleep deprivation and withdrawn behaviour to self-harm and suicide attempts. Some had lost the ability to speak.

The research drew on interviews in seven provinces with more than 450 children, parents, teachers, and psychologists, mainly in rebel-held areas including Idlib and Aleppo, and in Kurdish-controlled Hasaka.

The conflict has killed hundreds of thousands of people, made more than 11 million Syrians homeless, and created the world’s worst refugee crisis.

Some children had been forced to join armed groups to survive, Save the Children said.

“They have seen their friends and families die before their eyes or buried under the rubble of their homes,” the report released on Tuesday said. “They are the next generation who will have to rebuild their shattered country.”

If left untreated, the daily trauma could have other consequences, disrupting the development of the brain during formative years and likely to cause a rise in health problems into adulthood including depression and heart disease, the report said.

Most children had become more aggressive, or showed some symptoms of post-traumatic stress disorder, the interviews revealed.

“My son wakes up afraid in the middle of the night. He wakes up screaming,” the report quotes Firas, father of a three-year-old boy, as saying.

The lack of schools has worsened the crisis. One in three has been reduced to rubble, used to shelter displaced people, or turned into military bases or torture chambers, the charity said.

It quoted one teacher in the besieged town of Madaya as saying pupils “draw images of children being butchered in the war.”

The report also pointed to an increase in domestic violence, young boys being recruited into armed groups and girls married off as young as 12.

The charity called for more mental health programmes across Syria, adequate funding for psychological resources, and training for teachers.

But it added: “Ultimately, children need the main cause of their toxic stress - the violence that continues to rain down on Syria’s villages and cities with impunity - to end.”