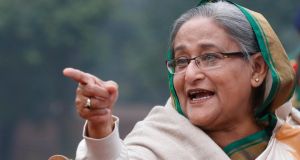 Bangladesh’s prime minister Sheikh Hasina Wajed at a press conference in Dhaka, Bangladesh, yesterday. On Sunday, her ruling Awami League party won one of the most violent elections in the country’s history. Photograph: Rajesh Kumar Singh/AP

Bangladesh’s prime minister says new polls could be called in the troubled south Asian nation if the opposition ends the violent protests in which hundreds of people have died in recent months. Sheikh Hasina Wajed (66) has also rejected charges that the boycott by opposition parties of the general election held on Sunday had undermined the legitimacy of her party’s landslide victory.

The ruling Awami League, which had already won well over a third of the 300 seats in the national parliament before the vote, added 104 more to its total on Sunday. Sheikh Hasina’s government now has a three-quarters majority with a minor allied party playing the role of opposition. “An election can happen any time [the opposition] comes for a dialogue, but they must stop violence,” she told reporters in Dhaka.

However, although senior Awami League officials privately admit that a new poll would have to be held to gain a “resounding mandate”, they also believe holding it too soon would be “detrimental to the security and economy of the country”.

The main opposition Bangladesh Nationalist Party (BNP) boycotted the elections after the Awami League refused to install a neutral caretaker administration before the poll. Government officials say they wanted the BNP to participate, even offering a choice of ministerial posts.

The BNP, led by Khaleda Zia (68), has alternated in power with the Awami League since democracy was restored to Bangladesh in 1991.

Observers have noted the absence of mass protests in recent weeks, with clashes mainly involving small groups of activists from either side.

The BNP says this is because a harsh crackdown has prevented supporters assembling for large demonstrations. Many of the party’s senior officials have been arrested. Ms Zia, its leader, has been effectively confined to her Dhaka home for almost a week.

Eighteen people were killed in the violence on Sunday, leading local newspapers to dub the poll the most violent ever in Bangladesh. Five more deaths were reported yesterday. – (Guardian service)