Homes, buildings and vast swathes of brush have been reduced to ashes by huge bushfires ripping through parts of Australia. Video: Reuters 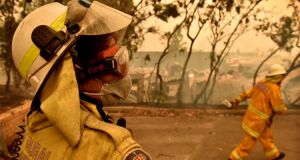 Two more people died, five others were missing feared dead and thousands were evacuated to beaches as Australia’s most devastating wildfire season on record worsened on Tuesday.

Police said a father and son died in the early hours of Tuesday defending their home in Cobargo, near the coast in the state of New South Wales (NSW), south of Sydney.

The town was hit by one out-of-control fire which roared into the community in the middle of the night, with its main street bearing the impact.

Further south, fires continued to blaze out of control in the state of Victoria, where some 4,000 people were forced to take shelter on the beach in the holiday town of Mallacoota, in the East Gippsland district along the Pacific coast. Around 4,000 more people were sheltering in community centres in the town.

Those sheltering on the beach were advised to go into the water if the fire situation worsened. Similar advice was given to people in several NSW coastal towns, where fearful residents and holidaymakers had also abandoned their dwellings to move onto beaches.

People in Mallacoota posted on social media about hearing the roar of the fire, circulating photos showing how, in the words of some, the smoke had turned “the day into night”.

Four people were missing in the area, where more than half a million acres of forest have been burnt out and where the intense heat and smoke from fires has been creating localised storm systems.

“It is pitch-black, it is quite scary... the community right now is under threat but we will hold our line and they will be saved and protected.”

Emergency services officials said it was possible towns in the Gippsland area could be evacuated by sea as the fires, fanned by strong winds, continued.

Another person was unaccounted for in the NSW town of Belowra.

As defence force personnel assisted firefighters and volunteers in tackling some of the worst blazes, eight fires were burning at emergency level across NSW, with a similar number ongoing in Victoria, and two more in the island state of Tasmania.

The death toll from more than three months of wildfires in multiple states now stands at 12.

Thousands of people have been displaced from their homes, with more than 1,000 dwellings ruined.

Victorian Premier Daniel Andrews on Tuesday said requests had been made for 70 firefighters from the United States and Canada to be flown in to help local crews.

Major roads were closed near the south coast of NSW including the country’s main national carriageway, the Pacific Highway.

Australian Prime Minister Scott Morrison posted a video address expressing sympathy over the death on Monday of volunteer firefighter Samuel McPaul (28) who died when what was described as “a fire tornado” flipped his truck off the ground while he attended a blaze near Albury, in southern NSW.

“As 2019 draws to a close, the devastating impact of these terrible bushfires continues,” Mr Morrison said.

Sydney’s iconic harbour-side fireworks were to go ahead, but with signs displayed of how people could donate money to help those affected by fires.