Three children, mother and grandmother found dead at a house in Bedford on Sunday

Australian police are investigating the death of five people, including a woman and children in a home in the suburb of Bedford in Perth, Western Australia. Video: Reuters 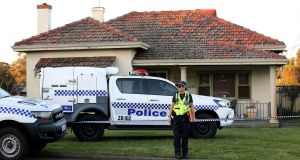 A police officer stands outside a property where five people were found dead in a suburb of Perth. Photograph: Richard Wainwright/Reuters

Australian police have charged a 24-year-old man with five counts of murder after the bodies of a family, including a mother and her three children, were discovered in the west coast city of Perth.

The ABC reported twin two-year-old girls, their three-and-a-half-year-old sister, their mother and grandmother were found dead at a house in Bedford on Sunday after a man went to a regional police station.

The relationship of the man to the victims has yet to be revealed by police.

Violent crime with multiple victims is rare in Australia but this was the second major incident in Western Australia this year. Seven people were shot and killed in the state in May.

Gun crime in Australia fell sharply after strict gun controls were introduced in response to a mass shooting in 1996, when a lone gunman killed 35 people in Tasmania.–Reuters