Those due in court over coverage of child sex abuse case include the Age, Macquarie Media and several News Corp publications 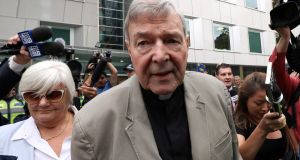 Prosecutors in the southeastern state of Victoria have accused the 23 journalists and 13 news outlets of aiding and abetting contempt of court by overseas media and breaching suppression orders. Prosecutors are seeking fines and jail terms.

Although Monday’s hearing is largely procedural, media experts say the case shows not only the serious consequences of breaching rules on court reporting but also how poorly the rules rein in coverage in the era of digital news.

“It shows that the laws themselves are out of sync with the speed and breadth of publication,” said Mark Pearson, a professor of journalism and social media at Griffith University in Queensland state.

“But the courts can only do what is available to them. The courts have to send a message that people deserve a fair trial and that people can’t publish what they want to when someone is facing court, if that might damage the trial.”

Macquarie Media did not respond to a request for comment but it has previously declined to comment, as the accusations are subject to legal proceedings.

Nine, which owns the Age and the Australian Financial Review, has denied the accusations and said it was surprised by the charges. News Corp has said it will defend itself vigorously.

Pell, who became the most senior Catholic cleric worldwide to be convicted of child sex abuse, was jailed for six years in February.

The county court of Victoria put a suppression order on reporting of Pell’s trial last year to prevent jury prejudice in that case, as well as on a second trial on other charges set for March.

In December, the jury in the first trial found Pell guilty of abusing two choir boys.

After the verdict, some Australian media said an unnamed high-profile person had been convicted of a serious crime that could not be reported.

No Australian media named Pell or the charges at the time, though some overseas media did.

Those who published online do not have offices or staff in Australia and were not charged for ignoring the suppression order but have lobbied against it.

“Gag orders are futile in a case of global interest in the digital age,” said Steven Butler, an official of the Washington-based Committee to Protect Journalists.

“We urge Australian authorities to drop these proceedings and to re-examine the application of such suppression orders,” added Mr Butler.

The gag order, which had applied across Australia “and on any website or other electronic or broadcast format accessible within Australia”, was lifted on Febrauary 26th when the charges that would have figured in the second trial were dropped. – Reuters

1 Passenger who promised driver a ‘few quid’ after crash awarded €10,000
2 Miriam Lord: Minister for Agriculture tries to get himself out of the manure
3 Driver whose car ‘rolled nine metres’ into front of other vehicle loses rear-ending claim
4 Coronavirus: One more death and 24 new cases reported in the Republic
5 Skeletal remains discovered in south Dublin were of man missing since 2011
Real news has value SUBSCRIBE