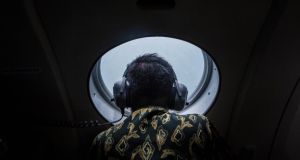 Investigators of the AirAsia flight which crashed into the sea off Indonesia are focusing on the timing of the crew’s request to climb to a higher altitude to avoid bad weather as a possible factor behind the tragedy, a source close to the inquiry said.

As Indonesian ships and aircraft recovered debris and bodies from AirAsia Flight QZ8501, the investigation into what happened on Sunday, when the aircraft carrying 162 people disappeared from radars, has begun.

Among the early lines of inquiry is whether the crew could have asked to ascend, or climbed on their own initiative in case of emergency at an earlier stage, and what role storms in the area might have played.

“We know that the weather was very bad in this area, there was a storm,” said the official, who declined to be named as he was not authorised to speak to the press.

“Why did he [the pilot] request to climb at that stage? Should he have climbed earlier? Other aircraft were flying at a higher altitude in that area. How did the two pilots react to the weather? We are asking those questions.”

Indonesia’s National Transportation Safety Committee (NTSC) will lead the investigation into the crash of the Airbus A320, together with representatives of the United States, France and Britain, according to the source.

He said evidence such as radar data, weather reports and communications between the pilots and air traffic control has been gathered and is being studied.

The black box flight recorders have yet to be located, and the source cautioned that it was too early to draw firm conclusions as to what went wrong.

It was not immediately clear whether Indonesia’s only pilots’ union represented the QZ8501 captain, Iriyanto, although it works mainly with employees of national carrier Garuda Indonesia.

Calls to the union late on Tuesday went unanswered.

Iriyanto (53), spent more than 10 years as a pilot trainer before flying with airlines including Merpati Airlines, Adam Air and, for the last three years, AirAsia.

The former fighter pilot also flew with the Indonesian Air Force, according to friends and family.

AirAsia boss Tony Fernandes said it was “too early to speculate” about the cause of the crash.

“I have full confidence in my ... crew,” he told reporters in Surabaya. “Our pilot was extremely experienced, [with] 20,000 hours [of flying time].

“He came from the air force, one of their best graduates. He came from Surabaya, so he knows the area very well.”

Iriyanto’s co-pilot on the crashed jet was Remi Plesel of France.

According to Indonesian authorities, at 6.12am on Sunday, 36 minutes after taking off from Surabaya’s Juanda Airport on a flight to Singapore, the pilot of the doomed aircraft asked for permission from Jakarta air traffic control to climb 6,000ft to 38,000ft and deviate to the left to avoid bad weather.

Two minutes later, Jakarta responded by asking QZ8501 to move about seven miles to the left and to climb to 34,000ft. There was no response from the cockpit.

The aircraft was detected by the ATC radar for another three minutes before disappearing at 6.18am.

According to flightradar24.com, a website that uses radar data to track aircraft live, other aircraft in the area were flying between 34,000 and 39,000 feet when QZ8501 disappeared.

Investigators are looking at the crash of Air France flight AF447 in 2009 for possible clues as to what happened on Sunday.

The investigation into the crash of that Airbus A330 showed the co-pilot lost speed readings due to icing, and his panic reaction put the plane into a stall which the rest of the crew failed to recognise, sending the aircraft plunging into the Atlantic Ocean.

“No two accidents are the same. But there are similar conditions like the weather, and we must look into it very closely,” said a second source, a former air crash investigator in Indonesia.

A Qantas Airways pilot with 25 years’ experience of flying in the region said pilots regularly climb to push above the cloud layer.

“But the airplane’s performance is directly related to the temperature outside and increasing altitude can lead to freezing of the static radar, giving pilots an erroneous radar reading,” said the pilot, requesting anonymity because he was not authorised to speak on the record.

The resulting danger, the pilot added, was that pilots take incorrect action to control the aircraft, such as pulling up the nose. Such an emergency could explain why the pilots had no time to issue a distress call.

A second seasoned pilot with an Asian carrier added that the crew could, at that point, experience what is called the “startle effect”.

This is “when they are overwhelmed by the situation and unable to think straight about the situation and their options, and act only on what they see in the cockpit controls”, he added. “That, unfortunately, would be the wrong thing to do.”