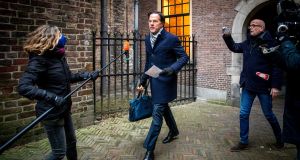 The four-party coalition government of Dutch prime minister Mark Rutte has been forced out of office by a long-running child benefits scandal – leaving the Netherlands with just a caretaker administration as it struggles to control the Covid-19 pandemic with a second nationwide lockdown.

Mr Rutte, who is leader of the centre-right Liberal party, met his coalition partners, the Christian Democrats, D66, and Christian Union, for what was described as a “tense” cabinet meeting on Friday morning. By lunchtime all four had bowed to the inevitable and agreed to resign en bloc.

“Innocent people have been criminalised and have had their lives ruined,” conceded the prime minister as he emerged from the meeting. “At the same time, parliament was not kept properly informed. It was a unanimous decision: the buck stops here.”

In political terms, the Rutte coalition was left with few options as the opposition prepared to table a vote of no confidence on Tuesday next at the culmination of a parliamentary debate that would have laid bare the full horror of the scandal which devastated some 20,000 families.

Between 2012 and 2017, those families were pursued by the Dutch tax office, ordered to repay child support benefits which were correctly theirs, in many cases pursued through the courts, and in some cases forced to sell their homes and left virtually destitute. They were denied all right to appeal.

The pressure applied by the tax office – which was given free rein by its ministers despite a public outcry – led to unemployment, bankruptcy and divorce, a parliamentary investigation later found.

Chris van Dam, chairman of that investigating committee, described the mismanagement by the tax authorities as “a mass process in which there was no room for nuance”, and said “fundamental principles of the rule of law were violated”.

On social media, the government’s critics were scathing, one welcoming its resignation as the “slow-motion collapse of a deaf, blind, and very cruel bureaucracy”.

It will have been an irony not lost on Mr Rutte, however, as he met King Willem-Alexander to deliver his resignation, that judged by its management of the coronavirus crisis his government has had the confidence of around two-thirds of the public.

Prime minister since 2010, Mr Rutte and his ministers will remain in a caretaker capacity until election day, March 17th – with the exception of economic affairs minister Eric Wiebes, who leaves immediately because of his closeness to the scandal.

Although in normal times the unexpected collapse of a government would probably have brought the election date forward, because of coronavirus it will remain as scheduled.

In that context, health minister Hugo de Jonge, who resigned as Christian Democrat leader before Christmas to remain in charge of the government’s pandemic campaign, will continue in that role.

This is the second time in the Netherlands’ modern history that a cabinet has resigned as a gesture of collective responsibility. The first was in 2002 when Wim Kok’s cabinet accepted partial responsibility for the Srebrenica massacre in 1995.