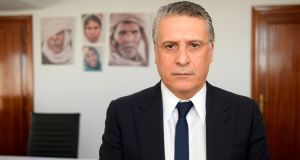 Tunisian presidential candidate Nabil Karoui: arrested on money-laundering charges on August 23rd, but the electoral commission has allowed him to compete in the September 15th poll. Photograph: Fethi Belaid

Campaigning ended on Friday in Tunisia’s presidential election before Sunday’s first round of voting, pitting more than two dozen candidates against each other, including a media mogul running for office from jail.

Tunisia is the last of the Arab Spring countries from 2011 that is still on a democratic track, after Egypt slipped back towards an authoritarian style of government and Syria and Libya descended into conflict.

The jailed Nabil Karoui, one of the leading candidates, started a hunger strike this week. He is owner of the unlicensed Nessma TV channel, which he has used to promote his political ambitions. He was detained in August on suspicion of tax evasion and money laundering, charges that his supporters say are politically motivated.

His detention is a wild card in the long-running struggle for political supremacy in the young democracy, which has pitted the moderate Islamist Ennahda party against the increasingly splintered anti-Islamist opposition to it.

Karoui’s appeal has been pitched against a sense of growing disillusionment with the country’s main political leaders, who have failed to improve the lives of ordinary citizens since the country launched the Arab Spring in 2011 with the toppling of Zine al-Abidine Ben Ali.

Karoui is sometimes depicted as Tunisia’s equivalent of Silvio Berlusconi. In reality, however, he is more like the wealthy paterfamilias in a Middle Eastern soap opera, a man touched by both tragedy and success – an image he has skilfully communicated to a key impoverished section of Tunisian society that has until now remained detached from the main political trends.

He has used his TV channel to air images of himself delivering aid from a family charity to the poor, a slick and sometimes populist figure in comparison with his rivals.

The wealthy secular political elite, which he once backed, now see him as a threat, while some on the Islamist side have still not forgiven him for screening Marjane Satrapi’s Franco-Iranian film Persepolis in 2011.

Chief among Karoui’s rivals is Youssef Chahed, the current prime minister. Karoui’s supporters blame him for putting their man behind bars in an effort to hobble his campaign.

In his campaign offices in Tunis, Karoui’s team believe the moves against him may have benefited their candidate, not least the constant attacks on him on social media which have kept their man’s name in the public eye.

“Before his arrest all the indications were that he was 10 points ahead, so we are confident,” said a spokesman, Abdelaziz Belkhodja, adding that they had managed the campaign without the presence of their candidate and with all of his accounts frozen.

“He started his hunger strike for several reasons, above all because he wants the right to vote and his civil rights recognised.”

The presidential vote was due to take place later in the autumn following parliamentary elections, but was abruptly brought forward after the death of the president, Béji Caïd Essebsi, in August.

Observers suggest the campaign is so close between the frontrunners that a fraction of a percentage point could decide who goes through to the run-off.

Although the role of president is supposed to be less important than the parliament and prime minister, Essebsi tried to accrue more power and status to the role, presenting himself as a modern incarnation of the country’s founding father, Habib Bourguiba, down to wearing the same style of glasses.

Tunisia’s economy, not least its key tourism sector, has struggled since terrorist attacks in 2015 on two tourist sites, the resort of Sousse and the Bardo museum, in which 60 people were killed.

Unemployment was at 12 per cent before the Arab Spring; it now stands at 15 per cent nationally with more than 30 per cent out of work in some cities, leading some voters to express nostalgia for the pre-revolution regime.

Although Tunisia’s electoral body has declared that Karoui is entitled to run, what is less clear is what would happen if he won the run-off for president, which would pose constitutional questions if he was still in jail.

Commenting on the importance of the current round of elections, Djordje Todorovic, a spokesman for a joint election observation mission by the National Democratic Institute and International Republican Institute, said that this time round Tunisians were more focused on day-to-day issues.

“The elections in 2011 were to punish the old regime and celebrate freedom. In 2015 it was an issue of identity – who was Islamist and who was not. Now the question voters are asking of politicians is: ‘What are you going to do for me?’ with the economy a priority.” – Guardian