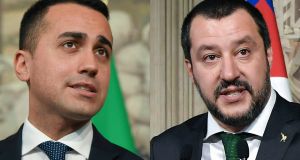 Italy’s two anti-establishment parties on Friday promised to ramp up spending in a programme for a new coalition government, putting them on a collision course with the European Union despite having dropped some of their most radical proposals.

The “contract” between the League and the Five Star Movement, the two parties that won the most parliamentary seats in an election on March 4th, still needs the approval of their memberships in informal votes to be concluded by Sunday.

“Days and nights of work,” League leader Matteo Salvini said on Twitter, where he distributed the final programme. “Do you like it?”

Mr Salvini said he and Five Star chief Luigi Di Maio would meet President Sergio Mattarella on Monday. Mr Mattarella must give his blessing to the programme and to their candidate for prime minister, who has yet to be named, before a government can be formed.

Five Star launched an online vote to get the approval of its members, reflecting its credo of direct democracy.

The document, published after 11 weeks of political stalemate in the euro zone’s third-largest economy, calls for billions of euro in tax cuts, additional spending on welfare for the poor, and a roll-back of pension reforms.

The euro sank on the latest developments on Friday and was headed for its fifth straight weekly fall against the dollar, in what would be a first for the currency since 2015.

The final accord dropped a previous draft proposal to create fiscal headroom by adjusting the formula used to calculate debt burdens in the EU, and contained nothing questioning Italy’s membership of the euro.

But it still called for a review of EU governance and fiscal rules – setting the stage for the bloc’s biggest political challenge since Britain voted to leave two years ago.

Both parties have a history of Euroscepticism. Five Star has moderated its position over the last year, but the League still wants to leave the euro zone as soon as politically feasible.

The document is seen as the basis for governing for the entire five-year legislative term.

After agreeing on a prime minister and cabinet team, the coalition will have to overcome confidence votes in parliament, and it has only a slim Senate majority of fewer than 10 seats.

Since there are few specific estimates on the costs of the measures, economists have come up with their own based on previous drafts. Carlo Cottarelli, a former senior International Monetary Fund official, estimated the annual cost of the measures at as much as €126 billion.

Mr Di Maio dismissed concern about the costs of the policies because, he said, they would stimulate growth, which would increase state revenue. “And there is leeway in Europe that we have to reclaim to be able to spend.”

Italian government bonds lost more ground on Friday, with 10-year yields set for their biggest weekly jump in almost three years. Investors are worried that a G7 nation, with a debt burden second only to Greece in the EU, is about to embark on a huge spending spree.

The accord also includes a plan to securitise the debt that the government owes to companies and individuals, creating short-term bonds – IOUs – that can be traded.

“Something must be done to resolve the problem of the public administration debts to taxpayers,” the accord said.

Claudio Borghi, the League’s economic chief who helped write the government plan, told la Verita newspaper that the new securities could be “spent anywhere, to buy anything”.

Mr Salvini’s pre-election ally, former prime minister Silvio Berlusconi, accused him of betraying their centre-right electoral alliance and urged him to back out of the deal with Mr Di Maio and “come back home”. – Reuters