‘This is too much for us’: Sierra Leone deluged by mud and grief 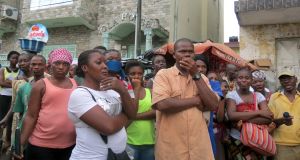 Onlookers outside the Connaught Morgue in Freetown on Tuesday, after mudslides that killed hundreds of people. Photograph: Saidu Bah/AFP/Getty Images 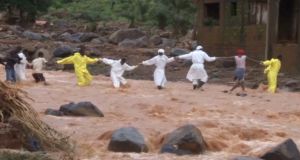 People wearing protective suits hold hands as they cross a river on Tuesday after a mudslide in the mountain town of Regent, Sierra Leone. Photograph: Reuters TV

The bodies floated down the streets and piled up at the morgue, where the coroners struggled to find room for all of the dead.

An already devastating flood the day before produced even more anguish on Tuesday in Sierra Leone as residents of Freetown, the capital, dug through the mud in search of missing family members.

The Red Cross said hundreds of people had been killed and 600 were missing after torrential rains early on Monday caused mudslides and transformed city streets into fast-moving rivers of muddy water, washing away everything in their path.

One worker at the city’s morgue, who was not authorised to speak to reporters, said he had seen as many as 400 bodies there. Residents of the poor communities built into the capital city’s unstable hillsides suffered the most. Their homes – shacks, really – were quickly buried or violently swept away in the deluge. Aid groups estimated that 3,000 people had been left homeless.

On Tuesday, Save the Children, an aid organisation, said that one of its staff members and his young children were among the hundreds missing. Many were thought to be entombed under tonnes of mud.

President Ernest Bai Koroma said in a televised address to the nation that he was “very disturbed by this national tragedy”, and promised to create an emergency response centre in Regent, a neighbourhood where dozens of people were thought to be trapped inside homes buried under soaked earth cleaved from the hillside.

“Let me assure you that my government is fully engaged on this situation,” the president said, advising people to remain calm and avoid areas still vulnerable to slides.

Despite the president’s pledge, it was clear that rescue and cleanup efforts would take time: Recovery teams lacked the appropriate equipment to dig through the extensive mud and debris. Phone and power outages spread across the city, and some roads were impassable. Homes that were still standing were caked in mud and coated with debris.

“We are also fearful of outbreaks of diseases such as cholera and typhoid,” Abu Bakarr Tarawallie, a spokesman for the Sierra Leone Red Cross Society, told Reuters. “We can only hope that this does not happen.”

The Freetown morgue had reached capacity on Monday, but bodies kept arriving on Tuesday. They were stacked outside where residents gathered to try to identify missing family members. The stench was overwhelming.

Mohamed Koroma, a university student in Freetown who visited the morgue on Tuesday, said people had to cover their faces with masks. “It’s like we are back again with Ebola,” he said, speaking of the 2014 outbreak that killed thousands in Sierra Leone and neighbouring nations. “This is too much for us as a country.”

Several countries have pledged support, including Nigeria, Israel and Liberia. Local and international aid organisations were helping to find survivors and retrieve the dead. Augustine Bright, a resident, said he had lost 10 members of his family.

When he arrived at the morgue to look for them, he was given a mask and led through hundreds of bodies strewn about the floor. Some were zipped up in body bags, he said, apparently ready for burial.

Government officials have said that people can claim their relatives’ bodies or choose to have the government bury them. Mr Bright could not find any of his missing relatives on Tuesday. After leaving the morgue, he returned to the patch of mud where his family’s home still stood. His elder brother and others were still trapped inside. He had no idea whether they were alive.