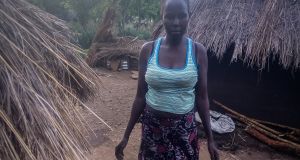 For hundreds of thousands of South Sudanese refugees in Uganda debating whether to stay put or return home, a new series of potentially deadly considerations have emerged.

In response to the threat posed by the coronavirus pandemic, Uganda last month banned public and private transport and closed businesses deemed non-essential.

As refugees living in camps contemplated the particular threat the virus posed to them, they were hit with another blow on April 1st when the World Food Programme cut their food rations by 30 per cent, a decision it said was necessitated by a funding shortfall of €125 million.

“I just feel like returning back home if I had a way out,” said Ajonye Grace, a 30-year-old mother of four who has been living in Uganda’s Bidibidi camp since August 2016, when she escaped South Sudan’s war. “I am already facing tough times. My children now take one meal a day.”

There are more than 800,000 South Sudanese refugees living in northern Uganda, according to the International Rescue Committee. While the east African country has only 54 cases of coronavirus so far, aid agencies warn that if the disease reaches refugee camps, the consequences could be catastrophic.

In Bidibidi, there are 907 people per square kilometre, a spokeswoman said, “indicating crowded conditions in the settlements that will make social distancing nearly impossible”.

South Sudan swore in a new power-sharing government in February, following more than six years of civil war. While hopes for lasting peace are growing, there are still pockets of violence.

The country also declared its first coronavirus case on April 5th, but a greater challenge at the moment is the upcoming “hunger season”. Tomson Phiri, a World Food Programme spokesman, told The Irish Times that 6.5 million people are expected to be “food insecure” between May and July – more than half South Sudan’s population.

Last December, the UN organisation said it was in a “race against time” to stop a famine.

“South Sudan was already dealing with multiple crises, after years of conflict, a drought episode in 2019, floods last autumn that decimated the harvest in many rural areas and a locust invasion in 2020. The Covid-19 pandemic will worsen an already dire situation,” Phiri said.

The announcement about reduced food rations in Uganda created fear and panic, with some refugees opting to walk to South Sudan, dodging police checkpoints along the porous border.

“This is going to affect my wellbeing,” said Yongo Lydia, a 29-year-old from Juba. “Now I’m not sure if the food will be [enough] to complete a month until the next distribution.”

She said she can no longer sell home-baked bread because coronavirus restrictions mean “law enforcers keep on chasing people”, and the land around the refugee camp is too dry to grow crops. She described her journey to Uganda in three words: “trauma, pain, tears.” She would like to go back to South Sudan if she could be certain it was safe.

“Ever since I came here the memories of my home have never been erased from my mind. I still think about home,” said Herbert Wani (43), a father of four from Morobo county in Central Equatoria state, where he says sporadic fighting is ongoing. “And with the restriction of being confined in one place I feel I’m in prison.”

Like many of the refugees in Bidibidi, Wani was a farmer. “My dream is to return home. I need to change and invest in my country,” he said. “Coronavirus and the rations cut is a double blow to my life and the refugee community.”

“My relatives have remained back in South Sudan and they too are suffering,” said Grace, who worries her children are becoming malnourished.

And coronavirus restrictions mean friends can’t comfort each other like they used to.

“We used to visit each other, console one another and live a very free life, but now it’s difficult,” she said, referring to the rules around social distancing and hand-washing. “Since I was born I have never seen or heard of anything like this. If countries with the best healthcare systems are registering high infection rates, what about Uganda? And here we are refugees.”