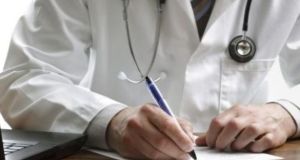 On July 31st, the average number of clinical diagnoses per doctor was 0.56, rising to 1.24 on August 4th, after the bank holiday weekend. Photograph: Getty

General practitioners have reported an increase in the number of patients who are presenting with Covid-19 symptoms since the August bank holiday weekend, a survey has found.

GP Buddy community tracker, a resource for GPs to monitor coronavirus referrals, has been asking doctors to report the number of patients presenting with symptoms of the virus in short daily surveys.

The tracker results highlight an increase in the average number of cases per GP of people who were clinically diagnosed with the virus, which means they are believed to have the condition based on their symptoms but it has not yet been confirmed by testing.

Overall, there were 298 cases clinically diagnosed by responding doctors on Tuesday, August 4th, up from 114 on July 31st, an increase of 160 per cent.

However, the number of respondents on each of the days differed – with 241 respondents to the survey on August 4th and 203 on July 31st – which could have an impact on the results.

On July 31st, the average number of clinical diagnoses per doctor was 0.56, rising to 1.24 on August 4th, after the bank holiday weekend.

GP Buddy said doctors often saw a “bank holiday Tuesday spike” and they hoped the results from the next few days would be lower.

Dr Maitiú Ó Tuathail, a general practitioner, said his practice had slowly seen a steady rise in the number of people seeking referral for testing since lockdown measures were lifted in July.

“I would say in the first two weeks in July, there could be several days that could pass where we wouldn’t refer a single person. What we’ve seen since the last lockdown measures have been reversed is a steady increase in the number of people contacting us,” he said.

However, he added this was a good thing, and the public should contact their local GP as soon as they experience any of the symptoms of the virus.

“The reality is that it’s very difficult to differentiate from Covid and other viral illnesses without a test. We are seeing people who are contact traced, who have little to no symptoms, but who are positive and people are contacting us with mild symptoms thinking it’s just a cold and they’re coming back positive. So people really need to contact their GP as soon as they develop any of the symptoms.”

At a briefing on Thursday morning, the Government warned that the country was in a very “delicate position” in terms of the spread of the virus.

Assistant secretary at the Department of the Taoiseach Liz Canavan said community transmission was the biggest risk because the source was difficult to find and clamp down on.

On Tuesday, four of the 50 new cases involved community transmission, meaning the source of the infection was unclear.