Merkel insists she will stay as door opens to successor 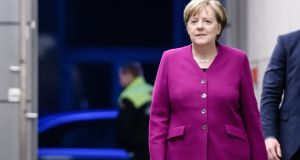 Angela Merkel says she felt bound to her campaign promise to serve a full term both as chancellor and CDU leader. Photograph: Clemens Bilan/EPA

Germany’s Angela Merkel has opened the race to find her successor, while insisting she will serve a full fourth term if re-elected chancellor.

Dr Merkel has been in political limbo since an inconclusive federal election last September, facing growing pressure from rivals within her Christian Democratic Union (CDU).

On Sunday she denied she was feeling the heat but conceded she would “naturally” include a younger generation of politicians in her fourth cabinet.

It was “natural” that a political party thinks about its future, she said, but she warned young pretenders not to expect her to vanish from the political landscape any time soon.

“When someone like me has been chancellor for 12 years, clearly they won’t be chancellor for another 12 years,” she said. But she recalled how had consulted widely within her party last year before running for a fourth term.

“I asked if it was right and wished for – and [the answer] was affirmative,” she told ZDF public television.

The 63 year-old added that, despite four months of exhausting coalition talks and continued uncertainty about her future – she felt bound to her campaign promise to serve a full term both as chancellor and CDU leader.

“I am one of those people who stick to what was promised,” she said.

Whether that coalition takes office, however, now hinges on a vote of 464,000 SPD members in a postal vote, with the result expected on March 4th.

On Sunday she invited herself onto a television talk show to reach out to critics, and address growing impatience around Europe at four months of standstill in Berlin.

She said the loss of the finance ministry was “painful” but essential to get a deal with the SPD and a government back to work in Berlin. The coalition agreement, she said, would ensure the new finance minister “cannot do or not do what he wants”.

With that she dampened expectations that, with Berlin’s coveted finance ministry returning to the SPD, Germany’s EU partners can expect looser German purse strings in the euro reform debate.

Agreeing with her on Sunday was the man likely to be her next finance minister: the SPD Hamburg mayor Olaf Scholz.

He promised to use budgetary wriggle room to invest in the economy, digitalisation and social cohesion. Berlin should not, as in the past, dictate economic policies to its euro zone partners but last week’s coalition agreement would retain the balanced budget policy of ex-minister Wolfgang Schäuble.

“With all additional wishes we have to look closely at what we can afford and what we can’t,” he said.

Amid chaos in the SPD after last week’s departure of leader Martin Schulz, Mr Scholz’s budgetary assurances will be welcome for CDU conservatives. Many see in French euro reform plans a plot to launch a European free-for-all investment plan financed by Germany.

For Dr Merkel, her dozen untouchable years in office ended on Sunday. By reaching out to ambitious would-be successors, breaking her long-time habit of never showing her hand, the race to find her successor has now begun.

One CDU figure rearing to go is party conservative Jens Spahn, calling for an open competition for the best political candidates.

“We’re not in a monarchy where one organises one’s own succession,” he said. “When the time comes, then candidates will have to assert themselves.”

1 Coronavirus: Numbers receiving pandemic payment falls as thousands return to work
2 Unidentified man has been in Irish psychiatric hospital for 30 years
3 Pricewatch: Left on the shelf - what we are no longer buying
4 Coronavirus: People told not to make appointments to buy furniture
5 Ireland’s coronavirus restrictions may lift more quickly if case numbers keep falling
Real news has value SUBSCRIBE