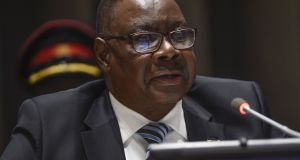 Peter Mutharika, president of Malawi: been visiting parts of the country affected by the violence. Photograph: Riccardo Savi/Getty Images

Police in Malawi said they arrested 140 suspected members of vigilante mobs that have targeted people accused of vampirism, clamping down after a wave of attacks in which at least nine have been lynched.

The mob attacks began in mid-September in four districts in southern Malawi, where belief in witchcraft is widespread.

This week they spread to Blantyre, the country’s second-biggest city, where mobs torched one person and stoned another to death on Wednesday.

“We have so far arrested 140 people we suspect are behind the mob killings in Blantyre and other districts and the investigations are still going on,” Lexon Kachama, inspector general of Malawi Police, told reporters.

Police were doing everything possible to contain the situation and ensure the violence did not spread to other cities and townships, he said.

Information minister Nicholaus Dausi said the government will put soldiers on the streets to stem the vampire rumours that have resulted in nine deaths.

“We are deploying the army in townships and districts affected to help police calm down the situation and save lives,” Dausi said.

President Peter Mutharika has also been visiting parts of the country affected by the violence.

The United Nations and US embassy have blacklisted several districts in Malawi as dangerous zones for staffers and nationals. Earlier this month, the UN pulled staff out of two areas in southern Malawi.