Ulster says no, maybe and yes to Irish passports 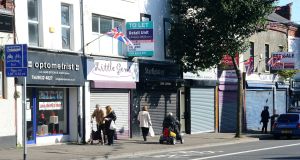 “There are loyalists who have said to me they would rather be poor in the UK than well-off in a united Ireland.” Above, the Shankill Road area. Photograph: Arthur Allison/Pacemaker

Opinion was split on the Shankill Road in Belfast about the Taoiseach’s suggestion this week that Brexit would see a scramble for Irish passports from people in Northern Ireland.

“Even people from a unionist background will want to become Irish and European citizens, at the very least for the convenience,” Leo Varadkar told reporters in Brussels as he articulated the “unique” challenge the UK’s planned exit from the European Union posed for Ireland.

The prospect drew a curt response from one man on the Shankhill. “F*** them,” he said. “I hate the Irish. I am British.”

Many people were happy to give their opinion on the matter but did not want to be identified.

A young couple said they were thinking about getting an Irish passport “for less hassle” at airports and “because you could be safer to travel in some parts of the world” as some countries were hostile to Britain.

Solicitor William Nugent (30) identifies as Northern Irish and holds both a British and Irish passport. “There are some staunch views on the Shankill,” he says. “I got an Irish passport for ease of entry to Uganda because I was going with a church mission group and it was better received than a UK passport.

“If you had a UK passport you kept being stopped and had to pay a £100 entry fee.”

An 84-year-old woman, who does not want to give her name, says she enjoys friendships with her nationalist neighbours and “a few years ago I considered applying [for an Irish passport] because my British passport ran out”.

She adds: “I have no problem with it but at my age, where am I going to go?”

Queen’s University Belfast researcher Sophie Long, who identifies as unionist and British and has studied loyalism extensively, got an Irish passport for ease of travel to overseas academic conferences.

However, she says: “There is a class dimension regarding the hardcore, loyalist, working-class, less mobile group. There are loyalists who have said to me they would rather be poor in the UK than well-off in a united Ireland.

“They don’t want to sweep past passport queues because a part of loyalist identity and demonstrating loyalty is sacrifice and suffering.”

The Taoiseach also stirred debate in the North this week by telling the BBC programme Spotlight regarding any future Border poll that a simple “50 per cent plus one” majority in Northern Ireland in favour of Irish unification would not be enough. He cited the “70 per cent vote” in 1998 for the Belfast agreement as a better threshold for “changing the constitutional position” in Northern Ireland.

On this issue, Ms Long believes “Fine Gael are trying to demonstrate they are more reasonable politicians”.

“They are trying to paint Sinn Féin as rash and driven by nationalist impulse without regard for security.”

Shankill councillor and PUP leader Billy Hutchinson voted remain in the Brexit referendum and does not believe 50 per cent plus one is sufficient for any referendum.

Should a Border poll come about, he believes the terms would have to be “hammered out politically”.

“There needs to be a threshold,” he says. Since the Brexit referendum Cllr Hutchinson has had two people approach him to sign Irish passport applications.

“I would never want an Irish passport but I know of staunch unionists who have said they have one so they wouldn’t be got by Isis or al-Qaeda.

“I have no problem signing Irish passport forms; people have different reasons for wanting one. It doesn’t mean because you have an Irish passport that means you want to be Irish.”

Family of Irish man detained in China: ‘Nobody is helping us – we are just begging for help’ 06:00
Covid-19: Is Christmas really the problem? 02:11
Brexit talks stall after tense week of negotiations 01:22
Sinn Féin's Brian Stanley to step away from politics for week 01:05
Miriam Lord: Sinn Féin has become Ireland’s new political delete 01:00

1 Family of Irish man detained in China: ‘Nobody is helping us – we are just begging for help’