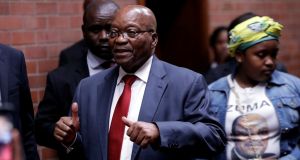 A lawyer representing former South African president Jacob Zuma, who faces corruption charges linked to a government arms deal, has accused state prosecutors of being biased against his client and infringing his rights.

Senior counsel Muzi Sikhakhane made the accusations against the National Prosecuting Authority (NPA) at the KwaZulu-Natal high court on Monday, where Mr Zuma is applying for a permanent stay of prosecution on 16 corruption charges against him.

Mr Sikhakhane accused the NPA leadership of hating Mr Zuma and unleashing “mob justice” against his client that was designed to undermine his constitutional right to a fair trial.

Mr Zuma is accused of fraud, money laundering and racketeering for bribes he allegedly took via his former business adviser, Schabir Shaik, from French arms company Thales which secured contracts in a late 1990s government arms deal worth hundreds of millions of euro.

In 2005 when Mr Zuma was South Africa’s deputy president, Mr Shaik was found guilty of accepting the bribes on his client’s behalf and sentenced to 15 years in jail.

Mr Zuma was subsequently charged with corruption in 2007 shortly after he became president of the African National Congress. But the charges were withdrawn by the NPA in 2009 in the weeks before he was sworn in as South Africa’s fourth president.

Mr Zuma successfully opposed efforts by the Democratic Alliance party to have the charges reinstated until 2017, when the supreme court of appeal held up an earlier high court ruling stating the NPA’s decision to drop them was “irrational”.

This week’s hearing on the matter is seen as Mr Zuma’s last chance to get the arms deal case against him dismissed before it goes to trial on October 15th next.

Later this week the NPA is expected to argue that Mr Zuma was the one responsible for delaying the corruption case from going ahead. On Monday Mr Sikhakhane said that if the NPA had a case against Mr Zuma, it should have charged him alongside Mr Shaik.

“We submit that Zuma’s absence in the Shaik trial amounted to trying him in his absence,” he said.

Mr Sikhakhane asked the court to dismiss the corruption charges on the grounds there was an NPA-driven political conspiracy against Mr Zuma that had led to unreasonable delays in getting the case to court.

As a result of these delays, and the vilification his client had endured at the hands of the public, he could not get a fair trial.

“It’s common cause that there was delay [in hearing the corruption case]. We differ about who was responsible,” said Mr Sikhakhane, adding: “The lapse of time is central and it should be looked at with these other factors.”

The hearing continues on Tuesday and is expected to run until Thursday.